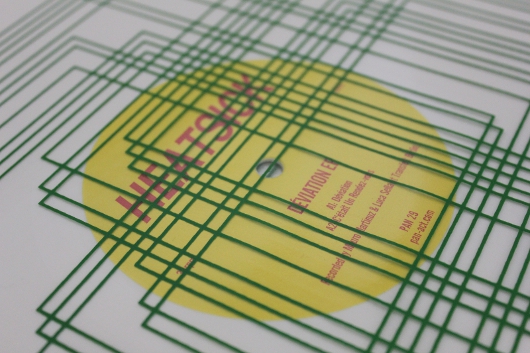 It’s been one of those rare weeks over the summer months in London where collective consideration is made towards the purchase of some portable turntables to dissect the stacks of vinyl in more open, park like surroundings.

Whilst externally we felt the heat, internally things started to melt too, most notably our cerebral cortices thanks to the latest offering from Mathematics boss Jamal Moss. Surfacing on Paul Du Lac’s Rotterdam operation Bio Rhythm, Jamal Moss treated us to three malfunctioning analogue freak outs under his intermittently used alias The Sun God with the lolloping mutant dance freakery of “Molokan (Rhythm Edit)” a real highlight.

There was an absolute shed load of other techno released this week (but no Shed) with Blawan dropping his most frightening collection of tracks yet for Frozen Border affiliate Black Sun (“Breathe Them Knees In” is particularly nerve throttling) as well as remixing The Third Side aka Steffi and The Analogue Cops along with Nightjars for a mouth watering taste of what to expect from the forthcoming LP from the trio. The Mills classic commonly referred to as Waveform Transmission Vol 1 saw a timely reissue, Actress did his best impression of Jamal Moss in remixing the new single from Teengirl Fantasy on R&S (a very good impression too), the Avian imprint unveiled yet another shadowy figure in the form of MPIA3 whose obscure audio format name doesn’t transfer to any loss of audio fidelity with two tracks of over driven, tooth & nail acid techno – you get a free badge too!  Token dropped a triple helping of Phase Remixes 12″s with Planetary Assault Systems, Sigha and Klock evocative of the standards – catch a breath – Numbers delivered another round of Strange Days from Italian legend Lory D whilst Truss debuted on Sigha’s Our Circular Sound with the submission baiting styles of Clytha, which came replete with Svreca and Tommy Four Seven remixes.

Moving away from the techno before 900 words are dedicated to the remaining load in that particular shed, the highlight of this week in house was undoubtedly Complete Spiral EP, the unexpected but naturally excellent twelve inch from Sprinkles and Mark Fell. One of those records where it’s hard to choose a highlight, right now we are favouring the twelve minute long brilliance of the title track – it’s the sort of house track you’d quite happily turn mad listening to on repeat as infinity approached. A similar reaction washed over us when basking in the latest slab of brilliance from Berlin based producer Heatsick, a man who hasn’t failed to impress us since debuting in vinyl shaped form with a killer Cocktail D’Amour release last year. Wrapped in a typically stunning sleeve by PAN – as modelled above – the Deviation EP has Heatsick continuing to explore the limits of his Casiotone keyboard and you’ll be hooked from the moment that cheeky and off-kilter MIDI riff snakes its way through the opening title track.

Rush Hour were so impressed by Simon Weiss’ contribution to their Amsterdam All Stars compilation last year, that they tapped the rising producer for a full EP of dusty gems that further suggests the Spuistraat operation has uncovered another real talent. Gerd Janson’s Running Back slipped out another quality twelve with Runaway and I:Cube messing with the programming of Lauer’s Tentatious, Mr Saturday Night debutant Anthony Naples switched the Four Tet by numbers 128 Harps into a brilliantly raw and wonky take on the deep house template and Prime Numbers continued their revival with a double vinyl helping from label buddy Nick Sinna.

Our most recent podcaster Timothy J Fairplay debuted on the keep-an-eye-on-this-one Emotional Response with the sumptuous four track EP Somebody Somewhere which further delved into the moods and influences the Weatherall cohort explored on that excellent Bird Scarer release, whilst Tiger & Woods’ Editainment switched up focus from cut up boogie to cut up 80s New Wave courtesy of a young Australian called River & Phoenix. On a similar changing stylistic focus tip, Peoples Potential Unlimited delivered a dinky seven inch from The Trash Company with two tracks that are best described as Minimal Wave’s Phillipe Laurent doing a cover version of Dilla backed with a lost cut from Demdike Stare’s Tryptych.

In the land of audio files known as Junodownload there was a preponderence of quality bass releases – the Bandshell debut on Hessle, for example, which taps into the grainy, murky sound world of the like of STL, Shed and Actress, exploring strange rhythms that feel constantly on the verge of breaking out into a frenzy. Lil Silva stepped up for the second edition of Night Slug’s incendiary Club Constructions series – with the maddening groove programmed from way out in leftfield of  “The 3rd”  the real standout track – whilst Planet Mu tasked Laurel Halo and Claude Speed with the chance to remix Kuedo’s “Work, Live & Sleep In Collapsing Space” with contrastingly motorik kraut and delicate results respectively. Oh and Modeselektion Vol 2 arrived – and with a cast that includes everyone from Clark, Prefuse 73 and Mouse On Mars to Lazer Sword, Martyn, Egyptrixx and Addy Groove – it’s easy to see why it’s called Modeselektor Proudly Presents.

We’ve been banging on about all the great 12″s from L.I.E.S. for a while now and the label has finally transported a few more of their choice releases from this year into the digital realm for the WAV heads – with Xosar’s superlative debut on the label joined by the excellent In The Mode For Love EP from Steve Summers and Mind Control, the wholly singular vision of modern Chicago jack from Svengalisghost. On a more techno tip, Clone’s second edition of their Drexciya reissues made the transition to download, whilst Skudge further dipped their toes in the binary waters with Convolution the first release from the Swedish duo’s eponymous label to made available in mp3 and WAV.

Should you be keen on a CD or two this week, there was a double dose of both techno reissues and Berlin club related mixes with a newly remastered version of Carl Craig’s Paperclip People classic The Secret Tapes of Dr. Eich joined by Steve Rachmad’s classic The Secret Life of Machines, whilst Nick Höppner and Solomun dropped new editions of the Panorama Bar and Watergate mixes respectively. And also check Resivior Dogs, the new oddly titled album from Mr Leonard “Big Strick” Strickland, if you want some of that Detroit goodness – especially peep the Omar S collaboration, a wonderfully deep and fluid track called “Family Affair.”