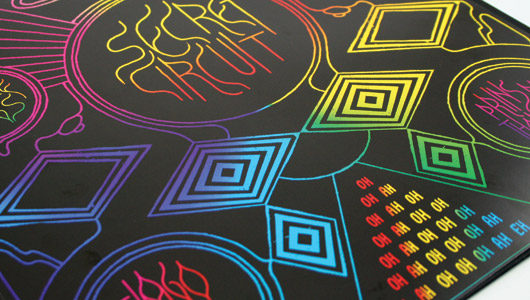 As previously mentioned in this column, the tidal wave of mediocrity that previously swept through contemporary disco seems to have moved on to occupy the shallower end of the house pool, meaning that there was actually some excellent records this week that you could loosely call disco.

EROS is one of the few current edit series that actually pays proper homage to the culture’s late 70’s/early 80’s forebearers, and this week saw the final transmission in the series, evoking the oft-stated saying “all good things come to an end”. Somehow the label has retained its self imposed anonymity whilst serving up some “lost classics from the raw, decadent and formative birth of club music” in a manner befitting of modern dancefloors. The third edition was just as good as the two previous EROS 12″s, though the more knowledgeable among you will have few problems placing the source material.

Prins Thomas’ Internasjonal Spesial copped artwork of the week for their great 12″ from Secret Circuit aka Eddie Ruscha. The above photo probably doesn’t do the presentation the justice it deserves, but the music from the recent Beats In Space contributor was a definite match. “Jungle Dogs Jungle Bones” demonstrates the broadness of Ruscha’s production palette, being less frenetic but equally detailed as his turnout on Tim Sweeney’s label, and it was complemented by some fine remixes from Tiago and Prinny T. Speaking of Mr Beats In Space, the latest release on his label arrived with suave Gallic charmers Paradis at the helm again for two more sensitive disco jams, while our favourite elder psychedelic funsters Peaking Lights dropped a nice twelve inch sample of what you can expect from the quite brilliant new album Lucifer in shape of the standout Lo Hi.

We are considering suggesting the Juno genre classifiers create a whole new category for World Unknown because their increasingly must-have curation of post 100bpm dancefloor chug doesn’t really fit into any pigeon holes does it? Number 6 in the series arrived with two transmissions from one of England’s lesser musically celebrated cities in Newcastle, but both contributions from Emile Strunz and Last Waltz slid in alongside previous World Unknown jams in our estimation. Equally dismissive of any attempts to slap a genre on him, Dro Carey returned to The Trilogy Tapes in fine style with Leary Blips, a six track set that casts the Australian in his most confident and complete frame of mind to date – from the moment the cavernous bass drops in the opening title track Carey takes you on a ride through music you’re not likely to have heard before.

“Salut The Noise With A Laugh” was the all too pertinent name for Marcus Mixx’s debut on the increasingly collectable Fit imprint, a track whose typically weird and twisted thump was mangled up with the titular laugh and all manner of delirious pulses of synth and drunken hats. Matching this in the track title of the week contest was the new 12″ grip from Future Times, with Beautiful Swimmer Max D inviting us to indulge in the “Orgies Of The Hemp Eaters”, where some vintage Sakamoto strings met thick bass and snapping percussion. Recent L.I.E.S White Label graduate Terreke got the call to remix the track, transforming Dunbar’s work into a woozy smudged out sideways jacker. There’s a reason he called it the “Can’t Get Enuff” remix you know.

Function debuted on Echochord with some understated techno in a manner similar to his final outing on the now (kind of) defunct Sandwell District, complemented by revisions from two fellow Berlin dwellers in Substance and Paul SCB Rose, while Carl Craig graced a twelve inch under his new Carls Davis guise spread across six arrangements that hark back to his Landcruising days. One Eyed Jacks, the Twin Peaks referencing label from our favourite Lisbon duo Photonz dropped an enlightening debut from Pal+ with the title track “The Forest” a wonderful combination of Stottifield grainy textures  and all consuming melodies that engulf the track in full flight. Ripping a rather large hole in the analogue techno time continuum were some raggedly disjointed 12″s from Appointment, Jack Curtu and R A G aka Aroy Dee and Ma Spaventi, while Modeselektor dropped a much needed double vinyl edition of their long out of print early 50 Weapons missives.

Over at Juno Download, the masterful Olde English Spelling Bee imprint returned from hibernation with Pink Keys, Alice Cohen’s first solo album in three years. Since she first started working as a songwriter in the early 1980s, Cohen has enjoyed a varied career, appearing in odd rock bands, crafting tracks for Martin Scorsese films and producing experimental, off-kilter rock and pop. Pink Keys finds her in fine form, adding her curious vocals to a range of glistening, synth-heavy instrumentals that largely steer clear of heavy beats in favour of something altogether more fragile. Meanwhile Brooklyn boy-girl duo The Hundred In The Hands dropped their second album on Warp, with Red Night shifting slightly from their previous output but retaining strong elements of dream-pop, avant-garde alt-rock and Walls-ish wall-of-sound electrinonica.

The pick of the singles came courtesy of Cosmin TRG, who continued his evolution as an artist which at times has seemed like a condensed history of electronic music in reverse. From jungle, bass and break beat to house, electro and Berghain techno, the Romanian paid homage to Detroit techno on “Vertigo” and “Sommer” in his own inimitable way.  There was an excellent remix package on Cooperative, with Surgeon, Richard Youngs and Matmos remixing tracks from Oneohtrix Point Never’s excellent Replica LP, and the award for the best 15-minute space-brass opus of the week went to Kelan Philip Cohran And The Hypnotic Brass Ensemble’s “Zincali” on Honest Jon’s.

Elsewhere, Jus-Ed dropped that Doe Do Dab mix of “Blaze” which first surfaced recently on Levon Vincent’s Fabric 63 mix, Mordant Music returned to extol the virtues of exploratory electronics that exist in a thoroughly darkened corner of your psyche, the ever-rising Mosca made a logical addition to the Hypercolour canon with his thoroughly contemporary hybrid house sound, and Fudge Fingas headed to the Delsin-affiliated Purple Maze with a killer EP on which the Motor City’s love for nagging disco loops against breakneck techno got slowed down and smacked out. Other digital niceness came from a disparate lot: Nathan Fake, who returned to Border Community with “Iceni Strings”; Onra, the French ambassador for future funk who debuted on the Fool’s Gold imprint; and Hemlock chief Untold, who slid up to Brainmath with a stand-alone cut of mutant rhythmic madness, once again demonstrating his power in subverting all around him.

On the CD shelves, Taragana Pyjarama released his debut album on Kompakt, with Tipped Bowls sitting somewhere between the woozy, off-kilter beauty of Walls and the glistening ambience of Trentemoller’s more downbeat moments, with a dash of West Coast glitchiness thrown in.