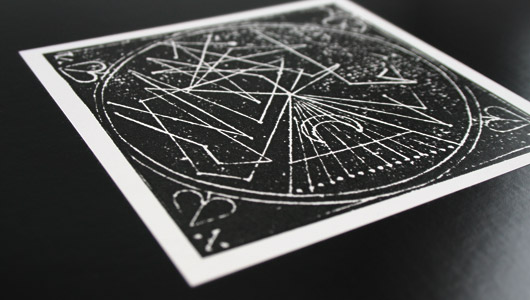 Perhaps the most impressive releases to surface this week were those from labels not afraid to turn things around and take an expectant audience by surprise.

Much has been said about L.I.E.S. and the uncompromising way it is run by Ron Morelli, but that still can’t prepare you for the total curveball release that is Unicursal Hexagram, a double vinyl helping of brain matter melting material from the mysterious Jahilliya Fields. As far removed from the rigid boundaries of of house and techno as possible, this six track release is an inspiring journey through immersive industrial  sound that represents a new chapter in the ongoing L.I.E.S. story. Complementing this, the label also welcomed Italian producer Simoncino into the L.I.E.S. fold with Dreams, a four track EP that draws on the classic house tropes of the genre’s Chicago based forbearers.

Matching Jahilliya Fields in terms of confounding expectations, we come to Bandshell’s debut release for Hessle Audio, a label whose awakening from release slumber this year has seen them release some extraordinary music. Dust March is perhaps their most ambitious release to date, tapping into the grainy, murky sound world of the likes of STL, Shed and Actress. The title track alone sounds like there isn’t a correct RPM setting on the turntable, though it pales in comparison to “Dog Sweater”, a homage to soundsystem culture whose threadbare rhythms are the only thing to stop you being dragged into the track’s viscous centre.

Alongside these releases, there were plenty of labels this week opting for stylistically consistent releases which are also worthy of mention, with the usual clutch of Dutch arrivals proving plentiful. In the Rotterdam corner, Clone coaxed Marco Bernardi into some more Royal Oak material with the typically immersive three tracker The Burning Love Ensemble, while Amsterdam was well represented with Rush Hour dropping some unreleased outer galactic Chicago House from the superbly named Jump Chico Slamm as well as welcoming back an absent production entity in KiNK. The Bulgarian’s Hand Made is up there with his best work and there’s a nice video demonstrating the methods that went into its production elsewhere on this site. Other notable releases from the Lowlands came from Purple Maze, who extended their family to include the talents of Fudge Fingas, and Aroy Dee’s M>O>S label who delivered some much needed new Chicago Shags material from Legowelt and Brian Chinetti.

Mentioning Untold and Cosmin TRG within techno terms would have seemed slightly ridiculous at one point of their respective recording career trajectories, but both producers are currently and successfully funneling down a techno groove, with the former unveiling the second part of his Change In A Dynamic Environment trilogy which sees the Hemlock boss draw on the aesthetic of early Detroit techno. This is similar to the sounds explored on Vertigo, the first material of 2012 from our favourite Romanian since Gheorghe Hagi, which still displays the wealth of idiosyncrasies that have characterised the many stylistic chapters of Cosmin TRG to date. Operating just on the fringes of techno was September Cell, Vatican Shadow’s first release on his evocatively titled Bed Of Nails imprint which takes the output of Downwards as a reference point, though the beatless kosmiche of the final track hints there is more to Dominick Fernow influences as Vatican Shadow than a fondness for 90s Birmingham based techno.

Over at Juno Download, the criminally overlooked Bubbletease Communications released Umbeya, a second Maurice Fulton produced album from Sheffield dwelling Tanzanian singer Mim Suleiman. If the combination of Mim and Maurice sounded strange on paper, it sounds glorious in full flow, with the deep basement vibes of “Chuki” and the flatulent disco of “Msimamo” standouts among the ten track set. Planet Mu meanwhile turned to the plush synthesised goodness of Polysick, whose Digital Natives album wove together myriad layers of arpeggiating strands to create a blissed out kind of electronica that engages the brain just as it soothes it. Other must-check digital albums this week came from Peaking Lights, whose Lucifer exuded innocence and wide-eyed delight at every turn, and London by way of Detroit and UAE producer Darling Farah, whose Body veered from tough swinging techno to beatless wonder.

On the singles front, DFA presented a four track remix EP of Sandro Perri that boasted a remix from the rarely spotted Zongamin, while Teki Latex’s Sound Pellegrino jumped into the murky bass pool with both feet, enlisting Finnish producer Teeth for an EP backed with remixes from Lazer Sword and Kowton. Don’t Be Afraid boss Semtek found himself on the excellent Awkward Movements with “Bento”, a pounding piece of techno-not techno backed by Scott Fraser’s 12 minute “Decompression dub” of pure dungeon acid, and Kingdom’s Fade To Mind imprint served up a debut EP from Massacooramaan. Pitched somewhere in the middle of Nguzunguzu’s psychedelic, tribal R&B and frantic Chicago footwork, Dead Long Time was a wild ride through chopped samples and syncopated beats.

Dipping our toes into more esoteric waters, Keith Fullerton Whitman’s Occlusions marked another high note in the unassailable discography of Editions Mego. Both compositional pieces were recorded at festivals in Europe earlier this year (you can hear some Gallic chatter in the background) and the results of the first composition were reminiscent of Actress’s recent sound design set at the Tate Modern as part of the Yayoi Kusama installation.

On the CD front, Strut commissioned Richard Sen to dig through the archives to unearth a string of dusty late 80s UK house gems. Eschewing the usual hits (“Carino”, “Voodoo Ray” etc), Sen proved conclusively that British producers were every bit as talented as their Chicago and New York counterparts back in the day.