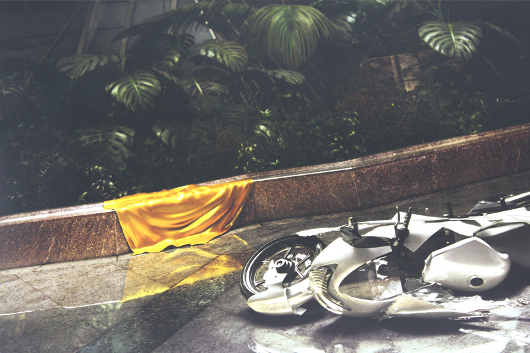 It’s nice when records drenched in expectation arrive and those ardent feelings are matched or even surpassed, and this week there were several of those releases to bask in.

Large paragraphs of detailed and glowing praise are likely to be found spread across all forms of musical media in the coming weeks for Classical Curves, the debut album from Night Slugs artist Jam City. It’s already begun and any subsequent acclaim will be fully justified, as rarely has there been such a confident vision of an alternate hyper-reality committed to a debut album. Our own thoughts forthcoming, we’ve been quite pre-occupied with staring at the amazing digitally rendered cover art as modelled above.

Helix’s “Stacks Riddim” occupies a similar “burning a hole in YouTube since forever” space to much of the Joy O canon and it finally arrived on the sterling All Caps label this week. Very much in the same 8 Bar Grime meets loopy Berlin techno of “Drum Tracks”, the young Georgia based producer’s contribution to the Night Slugs White Label series, All Caps could sell out this hand stamped 12″ on the strength of “Stacks Riddim” alone, but it’s the B Side that really grabbed our attention. Ever the fans of unrelenting, militant techno “Honig” has been getting some serious repeat play on our office turntables these past few days.

If you too are fans of unrelenting techno, then you will have course already earmarked the second release on Sheworks, Blawan’s label project with Pariah, which saw them give a wider platform for appreciating the talents of Dublin-based producer Sunil Sharpe. Housed in a rather smart mustard yellow sleeve, this 180g 12″ sees Sharpe rifle through four uncompromisingly raw and industrially charged techno productions that are suited for one purpose alone – “Shudder Blaze” is a particularly unhinged highlight. Naturally when discussing grungey techno you’d expect us to also point you in the direction of Fachwerk 25, the oh so originally titled second album in a space of a year from Mike Dehnert because, well it’s Dehnert on Fachwerk, but there are no end of surprises on this one – peep Richard Brophy’s review for a run down.

There was so much “deep house” this week we are wondering if the new nu disco is deep house. Moving away from the shallow end, the third Unthank release came through in typically sumptuous design with five tracks from Edinburgh’s Lord Of The Isles that matched anything the Firecracker empire has put out in the past (watch out for the Vakula LP dropping soon too). Don’t Be Afraid boss Semtek added In Plain Sight to the bounty of Blake owned labels he’s graced with the chunky house business of “Couer De Lyon”, Weatherall remixed Avery for Throne Of Blood, Scott Grooves’ new label reissued some classic Scott Grooves from Scott Grooves old label, while our favourite Egolozoid Funkineven dropped an amusingly titled Little Bastard remix on Photomachine’s EP for the newly minted 2020 Midnight Visions.

Our final vinyl recommendations go to the Type Records release of Pye Corner Audio’s Black Mill Tapes Vol 1&2 and Permissions Of Love, the wonderfully presented new EP from Tropic Of Cancer on Mannequin. Both records are indeed pricey but the music within is remarkable, challenging and ultimately rewarding enough to justify investigation – and they both look superb too!

Over at Juno Download, footwork trailblazer DJ Rashad dropped Teklife Vol 1, the first release on his new Lit City Trax imprint. Created in collaboration with DJ Spinn and associate J-Cush, and a label which promises to be the definitive label for Chicago’s well established footwork scene. At a massive 20 tracks this album is a meaty proposition, and it’s testament to Rashad’s talent that the album is entirely free of filler. Another album worthy of your attention came from Becoming Real, who, after garnering much praise for his idiosyncratic mix up of grime, footwork and diced R&B, delivered a debut opus of all that hysteria and flamboyant attitude that got him turning heads from an early stage.

Dntel’s 12 track offering for Pampa placed great emphasis on melodies and dream-like textures; at the other end of the scale was Andy Stott’s remix of Hundred In The Hands for Warp – expect slurring dubby drudge like only he can master. Meanwhile, Labour Division saw Forward Strategy Group tease new ghosts and fresh horrors from their machines –  as the eerie soundscapes and clinking chains on the supernatural “Fading Centres” so ably demonstrated – marking it as another shrewd signing by Perc Trax chief Ali Wells. The boss himself also commissioned a remix from Truss and Sigha, who turned “You Saw Me” a few shades darker as the duo introduced a dark, wobbly bassline and eerie, mysterious riffs.

On a housier tip, Marcellus Pittman, Kassem Mosse and Shake Shakir all contributed their own take on Madteo for an essential Meakusma EP, while Delsin’s second release in its fledgling house-tinged series was a killer, with veteran producer Steve Pickton aka Soul 223 at the helm for some jazzual deepness in the vein of KDJ.  Elsewhere, garage don Todd Edwards continued his revival with three versions of “Love Inside”, Terrence Dixon and DVS1 remixed Trus’me, leftfield noisenik Oneohtrix Point Never remixed Scandolearic hero Lindstrom, the aforementioned Jam City album on Night Slugs hit the digital shelves, and French electro-pop duo Paradis returned to Tim Sweeney’s Beats In Space imprint.