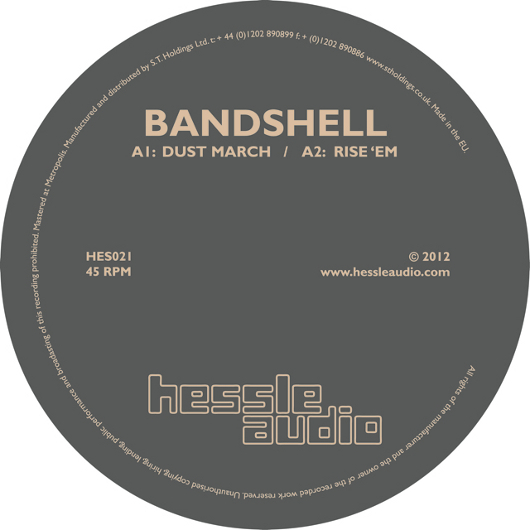 Hessle Audio have just announced their next release, a debut 12″ from Bandshell.

A label always guaranteed to send the internet into meltdown with the announcement of a new record, this one should get people even more hot under the collar as they try to scrape together information on the relative unknown, and exactly how to describe his music. Never a label to do things by halves, Hessle have followed up an especially challenging release from Elgato with something even more unique. Somewhere between the playful percussion of Joe, the hard hitting rhythms of Blawan and the swampy murk of Elgato’s low key approach, Bandshell’s four track debut is nonetheless a particularly bold debut, coated in grime and ratcheting tension levels up to the maximum.

Most striking is opener “Dust March”  – operating at a sub-110BPM tempo, its all pervading sense of dread and soporific percussion break new ground for a label that has never been afraid to push boundaries. Clips of the whole EP – which is a sizeable four tracks – can be heard below.