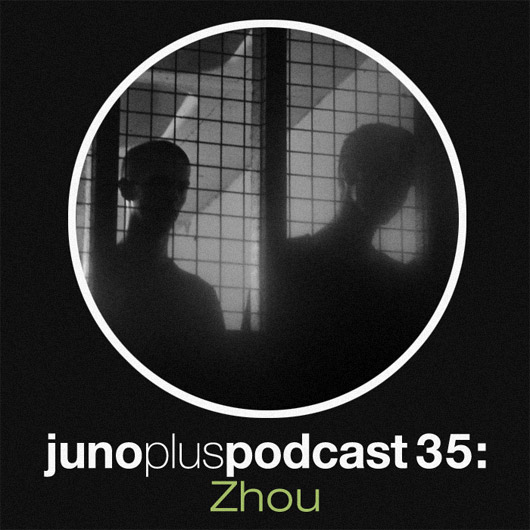 Zhou first came to our attention late last year with the release of the “I Remain”/”Noboru” double header on Peverelist’s Punch Drunk imprint. While the former track was an impressively dark piece of dubstep that could easily sit alongside anything in the Skull Disco canon, even more striking was “Noboru”, four minutes of oppressive echo chamber ambience that was a particularly bold choice for such a prominent label. Of course, as part of the Young Echo collective, along with similarly experimental artists such as Vessel and El Kid, it’s a path they’ve been travelling for several years, racking up releases on labels such as A Future Without and Astro:Dynamics along the way, creating bass heavy music with a uniquely delicate touch.

Although we spoke to the duo, otherwise known as Cris Ebdon and Amos Childs as part of our recent interview with Young Echo, we thought it only right to to hit up the duo for a podcast, to let them present their interests and influences to the world outside of the group.

What they delivered to us was quite unlike any other Juno Plus podcast to date, exploring a shadowy mix of ambient textures, percussive dubstep and classic dub, taking in contributions from themselves and their Young Echo cohorts alongside the likes of Shackleton, 2562 and Scientist.

How long have you guys been working together on music? Did that predate the coming together of what we know as the Young Echo collective or did your partnership grow out of that?

Amos: We have been making music together for about five years now, since Cris and I became friends, so yes it goes back further than Young Echo which we started properly in 2010.

You both produce individually as Jabu and Ishan Sound – how does your approach to the Zhou project differ to your respective solo work?

Amos: For me, our music together as Zhou is very focused on sound systems and all of the tunes are written for a specific setting. Even the more drone based music we write, whilst not being dance music, I would still categorise as being sound system music. Jabu is a lot more open in a way because there isn’t really any rules, its just me trying to be honest and make music that I’m happy with.

Cris: With Ishan Sound I try to focus on the more melodic and rhythmic elements of reggae music, whereas with Zhou my focus is a lot more on the sounds and creating an atmosphere with a lot more dread.

Your mix has a fair bit of dub on it, and your release for Punch Drunk is a fairly heady piece of soundsystem music – is soundsystem culture a big influence on you and your music?

Amos: Yes definitely. Its important for us to know the history behind the music we are interested in, and to respect the culture that it represents.

We were particularly intrigued by the links you mad in your mix between dub music and experimental/drone – something you share with fellow Bristolian Ekoplekz. Your track “Noboru” was a particularly brave choice for a major release, being so drone based – what’s your attraction to this kind of form?

Cris: As much as Dub music plays a big role representing a lot of the music we listen to day today, we share a fascination with more experimental electronic music and the synthesis of sounds. With it being our first physical release, we discussed the importance of offering a balanced picture of the music we are interested in to the listener.

There’s a lot of representation from outside Bristol of Young Echo as a definitive movement and a key part of the Bristol “scene” – would you say this is the case, and how do you feel this tallies up with the motivations of you and those involved?

Amos: We are all very indebted to the various scenes that have come before us in Bristol, and also very involved with a lot of people currently on the ‘scene’; Tom Peverelist has been very supportive and we owe a lot to him. With Young Echo we wanted to be considered as a group and I think a large part of that is from looking back at music in Bristol and recognising that the lasting stuff is almost never one person working in isolation. Its nice that people can listen to a dancefloor track by Joe and then a piece of beatless music by Sam. We wanted to force people to see the links, it makes it more interesting that way.

We know you have the Young Echo compilation on Ramp coming soon, what kind of tracks will you be contributing for that? And what about releases/plans beyond that?

Amos: Its going to be a real mix, which is fitting. Tom (Ramp) heard the links between the tracks and has chosen really carefully. We are all very excited to see it come out. As for plans beyond that, me and Alex are have been working on a live Jabu set, we have a tape coming out on Astro:Dynamics in the next month or so and Young Echo are playing Boiler Room on May 29 so keep an eye out for that.

Juno Plus Podcast 35 – Zhou by Juno Plus on Mixcloud