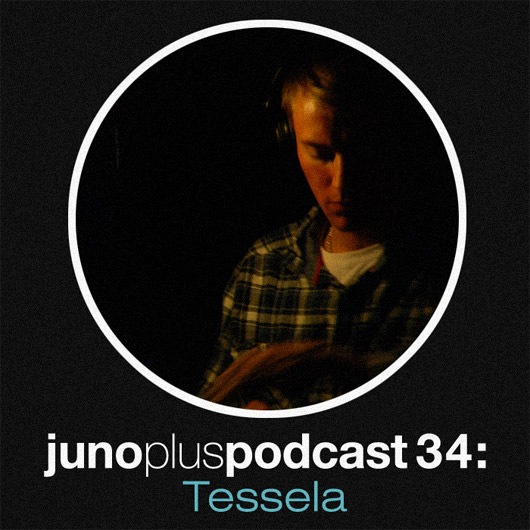 Juno Plus Podcast 34 is an uncompromising techno session from Tessela.

The West Country based producer might not be the most prolific, but he has certainly developed a distinct sound, focusing on a forthright, swinging and smacky production style that has graced a disparate but well respected clutch of UK labels thus far. Tessela first swung into focus with Slugger, the out of the blue debut for Irish beat botherers All City, before arising with meaty contributions to the 2nd Drop label and Punch Drunk. The latter was perhaps one of our favourite 12”s on Peverelist’s all conquering label in recent times, with “Channel” in particular demonstrating a rugged panache for box jam beats and cracking MPC funk.

The early promise Tessela showed on a remix of Truss for Perc Trax will be explored further with his forthcoming remix shaped contribution to the next release on the fledgling Vae Victis imprint from Die Roh duo Luca Segato and Marco Zanin.

The scene was set for a Juno Plus podcast then, and Tessela duly obliged with a thumping hour’s worth of music that throws in a tantalising sound of what to expect from Sunil Sharpe’s EP for Blawan and Pariah’s label She Works along with contributions from Juno Plus favourites D’Marc Cantu, Gerry Read, Alex Coulton and Geeeman. Tessela was also kind enough to engage in a bout of email Q &A for us.

Hi Tessela, tell us a bit about your Juno Plus mix – how and where did you record it?

The mix was recorded in my studio at the top of my house on 2 CDJs. I also had to do a crafty little edit as I kinda clanged one of the mixes.

You grew up in Bath is that correct – were your formative musical years spent frequenting the nightlife of nearby Bristol or did you arrive at your current direction in a different way?

I actually grew up in South Wales until I was about 10 or 11, and then about an hour south of London until I was about 18. It’s only been in the past year I’ve been living in the west country. Being close to London when I was younger had a big impact I think. I had a lot of friends who lived in London so I’d go and stay with them on the weekends and we’d go to drum & bass parties. It was around then I really started getting into electronic music, and when I first started making tracks. Being near Bristol recently though has been great. There always seems to be a lot going on, and there are so many really talented guys in this part of the country.

You mix contains a lot of techno– arguably most people would probably see you as a “bass” producer. However, your sound certainly has strong elements of techno and shares a common thread with what Blawan is doing – how long have you been into techno and how did you arrive at it?

I’m not entirely sure when I first began appreciating techno, but seeing Jeff Mills when I was about 16 is one of my fondest clubbing memories, and it is still one of the best sets I’ve ever seen. When the 909 came out and he started jamming with it knelt on one knee, the whole place, including myself, completely lost it. When I play out I tend to play about half techno and half broken, swingier stuff but the techno-to-swing ratio seems to be going in techno’s favour more and more these days. Up until a year or two ago I think I was a bit reluctant to play or make straight 4/4 tracks, as I was under the impression you couldn’t create the same impact as you might be able to by playing a swung, angular, super bass heavy track. Obviously that’s not true though; repetitive or hypnotic music can cause havoc in the dance. I started playing techno as a means of holding my sets together a bit more. If you’re just playing crooked, bass heavy tracks that are often rhythmically very different it can be hard to play a flowing, logical set and an audience can be a little lost by the lack of coherence.

You’re an intriguing choice of producer to remix something on Vae Victis, whose analogue focused records to date have been a little leaner than your hefty productions – how did that come about?

Giulio (Co-owner of Vae Victis) originally contacted me regarding a booking in Italy and we’ve kept in touch since. His label has got off to great start (the first Blawan and Analogue cops release in particular was great, the production is real nice), so I was more than happy to do a remix for them.

You have released on a disparate bunch of labels in your career so far – Perc, All City, Punch Drunk, 2nd Drop and now Vae Victis. Is it a conscious decision by you to put out music on such a wide range of labels?

Not really, no. It’s just one of those things. It’s been great to put music out on a lot of labels I really respect. I think my tracks are often fairly varied and each release tends to be quite different so it sort of makes sense to put stuff out on a few different labels. When you start putting your music into the public domain you start getting offers from a really varied mix of labels. I guess it’s just trying to strike the right balance and going with the ones that feel right.

For some further reading check out this interview Tessela did with the Vae Victis chaps. Die Roh’s Van Draft EP, featuring a Tessela remix, is out soon.

Juno Plus Podcast 34 – Tessela by Juno Plus on Mixcloud