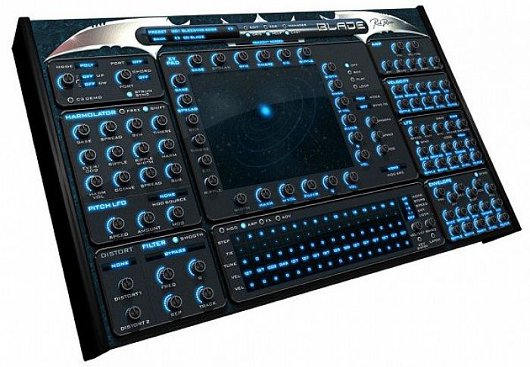 Rob Papen’s new Blade additive soft synth cuts through the tedious aspects of programming and sound design and places the user firmly in the driving seat.

First, some background: additive synthesis utilises the concept that any one sound is made up of overtones or harmonics. These harmonics – sometimes known as partials – make up the overall timbre. It’s possible to add different sinewaves together to affect the timbre of a synthesized sound. This is in contrast to subtractive synthesis, which uses filters to take away some of these harmonics – a bit like how our favourite analogue synths work.

To delve into additive synthesis, it’s important to know about Fourier analysis. Be warned, it is heavy on maths and physics. This writer is more interested in making music than working on mathematical equations, so how exactly do we use this form of synthesis in making music? This is where Rob Papen’s Blade soft synth comes into play. On opening, one could be forgiven for being a bit overwhelmed by the look of this function-rich soft synth as it does have a lot of sections. But once you get to grips with how the synth works, a whole new world of synthesis opens up. Put simply, at the beating heart of this complex instrument is a simplified oscillator named the Harmolator, which allows, in the simplest way possible, to create the waveform – the first building block in the foundation of your sound.

With 96 partials to get to know, the Harmolator simplifies the process of getting off the ground, and there are plenty of useful tools to help you along the way. Your sound can be displayed on a spectral analyser which will show the harmonic content of your sound to visualise how it’s being manipulated. Changing the position of your first partial, changing the balance between odd and even numbered partials and manipulating the overall balance of the harmonics is all easily done. The Harmolator section also allows the addition of three more Harmolators to widen and thicken your sound. There is also the ability to add sub harmonics; the placing of those sub harmonics is also editable. Once you’ve mastered this crucial aspect of the synth then you can move on to more familiar parts of the sound creation process. The amp section is almost the same as you would find in any synthesizer, with the addition of fade and velocity volume parameters. There is a touch velocity induced filter section, an LFO section (which is syncable and has a handy assignable speed control), and a syncable envelope section. All of the modules and their parameters can be turned on or off by clicking on their names, and the virtual knobs can be put to zero with a simple double click, which helps the work flow considerably.

One of the standout features of this synth is the interactive X-Y filter pad, which dominates the somewhat cluttered appearance. One of the ways in which Mr. Papen has helped us facilitate our own creativity here is to allow the X-Y pad movements to be recorded, played back and looped. In short, this simplifies what could potentially be a complex set of envelope parameters into one easy step. You might want to sync it to your DAW, change the speed in which the X-Y information occurs, or allow the mod wheel of your control keyboard to change the speed and make the loop go backwards and forwards. This writer felt that playing with one hand while manipulating the mouse with the other was difficult, but you can always map your controller to the X and Y parameters and control it from your keyboard instead. This form of X-Y control really allows you to realize the sounds creeping around your imagination, and Papen’s goal of putting the humanity back into synthesis is achieved here. There’s also a fully editable arpeggiator with the ability to step write in different pitches and even miss out some steps, which is more akin to sequencing than a simple up/down/random arpeggiator type. To top it off there are two FX banks with editable parameters to get your sounds fully into flight.

If you’re not into the finer points of sound design and simply looking for good out-of-the-box sounds then you won’t be disappointed here either – there are plenty of wobbly basses, leads and sweeping pads to get your teeth into. Browsing for sounds is made easy by some interesting features; there is a quick browse search option and the last eight loaded sounds are memorised – and essential tool for those of us who change their mind regularly – as well as various preset and bank renaming and saving functions. The Blade comes in AU, VST and RTAS formats for Mac and VST and RTAS for Windows, with the new AAX format set to become available for Mac at a later date.

There are other additive synthesis plug-ins on the market from Image-Line, Native Instruments and Camel Audio, and there is more interest in this form of sound design of late because a lot of the fast evolving and morphing textures found in genres such as dubstep and bass can be easily replicated here. In the end it’s Blade’s stability and fundamental simplicity that give it an edge over competitors, even if the overall appearance of the screen is a little overwhelming. If you can get past the initial visual overload of Blade then you will more than likely be rewarded.