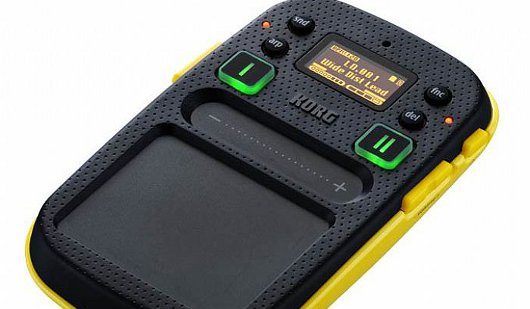 Korg have updated their original Kaossilator with something smaller, sleeker and more functional: the Dynamic Phrase Synthesizer, AKA the Kaossilator 2.

In 2007 Korg released the first version of their X-Y pad controlled mini workstation. With the look and feel of their hugely successful Kaos pad effects unit, the original Kaossilator allowed those of us familiar with the feel of the pad’s X-Y control surface the chance to get our heads (and hands) around a synth workstation, without the need for an above average keyboard utility. Allowing the user to capture their own loops and phrases in a machine that’s both small and easy to use fired the imagination of its users and prompted Korg to come up with the larger Kaossilator Pro a few years later. With the Kaossilator 2, we are given some of the features and functionality found in the first version along with  advanced utilities worthy of the pro model. This diminutive synth fits into the palm of your hand, and is actually smaller and lighter than the original. The encoder, present the first time round, has been replaced with a ribbon slider and the main control pad itself has been revised and downsized. Instead of phono jacks there is now a single 3.5mm headphone jack, and the adjustable display has been upgraded. There is also the ability to record audio from either the built-in mic or by plugging in to the mini mic/line input that sits next to the headphone output. Once you’ve worked up your loops and phrases, you can save them to a micro SD card, which can also be used to playback wav files imported from another source.

After holding down the power on button for a second or so, the Kaossilator 2 comes to life and directs us to the default sound page. There are four mini buttons to control the synth; sound, arpeggiator, delete and function. Pressing the function button allows us to scroll through the various modes which ready the machine for use. After choosing the BPM we’re given the option to choose which key we want to play in. (The reason for this is because the synth is played using an X-Y pad and not a traditional keyboard, and choosing the key allows the user to define the type of scale they want to use.) This stops you from playing any “wrong” notes; or rather notes that don’t fit with the key you are performing in. There are 35 different scales to choose from, so there is no shortage of options , and you can turn the scale off or choose any number of major or minor modes (including blues, jazz and modes found in world music). It’s also possible to edit the range of the sound you are working on from a single octave all the way up to six. The even numbered octaves drop to the lower octave, while the odd numbered ones jump up. There are 50 arpeggio patterns to choose from and they are all single note, gated rhythm patterns. Although you can’t have changing pitches there is a lot of variety, as the patterns incorporate different note lengths as well as rhythms and these are further editable in the arp time and swing functions.

There are two loop banks, or channels, on this machine – both can be up to 16 beats in length – and the relative volume level of the two banks can be offset against each other. You can record loops and save them to a pre-formatted mini SD card, or even record an entire performance on the Kaossilator 2’s master recorder  (there is also the ability to play back audio stored on cards as long as it is a wav file). The utility section allows you to decide what kind of battery you’re using or change the brightness of the display and format and test SD cards. 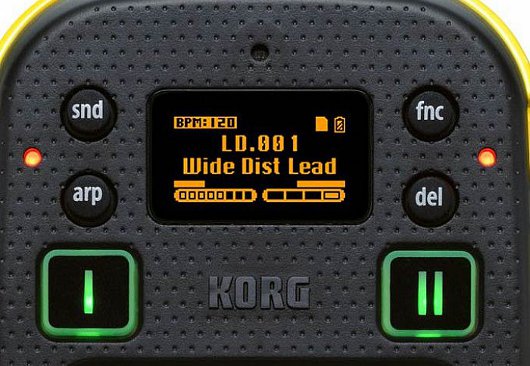 There is a built-in speaker but for best results it’s probably wise to either use headphones or plug in to an external amp of some kind. The output is clean and loud and generally the preset sounds are full and rich, even though they are only editable by filtering using the control pad. They are organised into seven categories that are quickly accessible by holding down the sound button and scrolling with the slider. There is a full battery of lead, acoustic, bass, chord, effect, drum and drum pattern banks to whet your appetite and they are all up to the standard that one would expect from Korg.

It’s a bit of a challenge to record your own beat in time as there is no audible metronome, only a visual one. You can get around this by playing along to one of the preset patterns and adjusting the balance of the volume, effectively using the preset as a metronome. There is no rhythm quantize function either, so you need to be somewhat adept at using the pad. The reason for this omission is the fact that the loops are captured as audio and not data and it’s a lot more complex to quantize on audio than, for example, midi notes. The addition of the mic input allows limitless possibilities in layering up sounds and Korg have carefully thought out the small things such as the fact that enabling the mic also mutes the external speaker (so there is no feedback). There is also an iPhone app, which you can use in conjunction with the Kaossilator 2, allowing BPM to sync, further enhancing its performance possibilities.

Korg have created a machine that uses synth-modelling technology and PCM drum sounds to put some fun back into music making. From the stable of the company that have a history of high quality, small sized products, this phrase-making synthesizer is a pleasant surprise. The ingredients of X-Y pad control technology with simply designed work flows and the addition of mic/line input give the Kaossilator a unique place in the world of loop creation, allowing users of all backgrounds and abilities the chance to experiment.