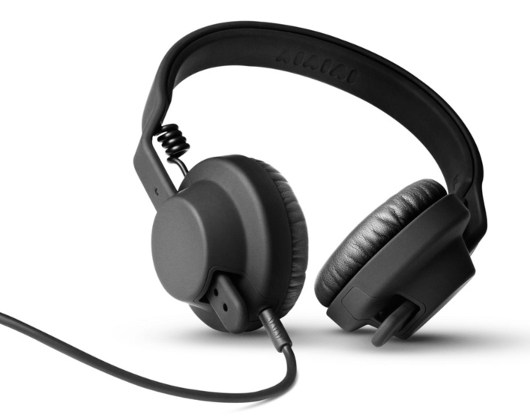 In line with the Danes’ reputation for high end electro-acoustic engineering, AIAIAI have teamed up with a bunch of new school, heavyweight DJs to bring us their TMA-1 headphones.

Based in Copenhagen, AIAIAI are in the business of delivering quality audio products for everyday use without any excess baggage, and their TMA-1 close backed headphones are a testament to their highly collaborative development process. In creating the product they sought feedback from some of the busiest DJs in the business; Prins Thomas, James Murphy, Tim Sweeney, Bookashade, Hot Chip and Pilooski were all tapped up. Although they claim that this product is for hard working musicians and audiophiles, in reality it’s going to be DJs that will benefit most from their design features – more on that later.

The TMA-1 arrives in a bespoke box that requires a pair of heavy-duty scissors to open -a nice change from the standard close wrapped plastic container. It brings to mind other luxury audio items, such as Shure’s open backed SRH1840 headphones, reviewed here in March. Easing these headphones out of their foam base, you immediately notice the simplicity of the design. There are few extra parts – a spare set of interchangeable ear pads and two types of cable, one curly, stretchable type and a straight type which has a microphone built in. Both come with 1/8” jacks on the end with a ¼” adapter, also in the box. There is also a silky grey bag with a heavy-duty zipper for carrying the headphones from show to show.

These headphones are designed to minimise the ambient sound surrounding the wearer; this design is favoured by DJs because it allows them to hear what they’re cueing without being impeded by the booth monitor or the sound system. The titanium drivers are 40mm wide and sit comfortably on the ears (as opposed to wrapping over your ears), and the rubberised surface has a sturdy feel to it. AIAIAI claim they want to minimise any wasteful, trendy affectations so they have gone back to basics and thought about exactly what the headphones do – and don’t – need.

The result is a minimal yet chunky affair that feels like it’s built to withstand a hefty beating. The notches to adjust the size of the cans are large holes punched into the side of the bar, with the actual drivers serviced by two stretchable leads that sit safely under the bar and out of harm’s way. The entire product has a protective rubber casing that is both luxuriant and strong. You can’t swivel the drivers around to access one cup at a time, but the bar is malleable enough to take one ear off and still have the headphones hug your head so they won’t fall off. The lead that services the cans is also replaceable and snaps into place with confidence, allowing you piece of mind that it’s not going to fall out mid mix. It should also be noted that the ends are at a right angle, which helps keep the wire safe from wear and tear. The straight lead also has a microphone built-in and three buttons to take calls and control the music levels if you’re using a smart phone.

So what do these headphones actually sound like? After trying them in various different sound sources (iPod, Vestax, Rane) it becomes apparent that, although the sound isn’t accurate, there might be good reason for this. Looking at the frequency response table on the inner lid of the box, you can quite clearly see that the range goes from 20Hz all the way up to a ceiling shattering 20kHz. But there are some frequencies that have been scooped out, around 700Hz and heavily between 1.8kHz and 4.5kHz, with a little scooped out at 11kHz, giving the sound a very bottom-heavy feel. AIAIAI aren’t hiding the fact and it’s plain to hear; the frequency response table shows exactly what you hear when you listen with these headphones.

So why would that be? One can speculate that they have taken the decision to take out a portion of these frequencies to safeguard the ears of the heavy user. Any DJ that has ever played for more than a few months has probably come across sound systems that are loud. When the dancefloor is loud, then you often need to turn the booth monitor up so that you’re not mixing to the dance floor (in big clubs there can be multi millisecond delays from the dance floor to the booth). Furthermore, DJs often have to turn the headphone levels up to monitor the music they are cueing – this is not healthy and can cause tinnitus, which often shows itself in the form of a ringing sensation in your ear after the night is over. It usually subsides after some time but for busy DJs it’s a real concern. The frequencies that AIAIAI have scooped out of the response in these headphones are ones that are particularly harsh on the ears; it would seem that they have really taken to heart the needs of the busy DJ.

There has been some complaints about the lack of padding for the top of their headband, but it’s a small quibble as the overall fit is comfortable. There are murmurings about the amount of isolation from these closed backed cans not being quite enough, but then again this might be because of the frequency response and AIAIAI looking out for safety again. All in all, this is a high quality product that has been carefully thought through and built to withstand touring on a global scale. Perhaps it’s more suited to a busy DJ than an audiophile, but when it comes to quality and functional equipment with AIAIAI you’re in safe hands.