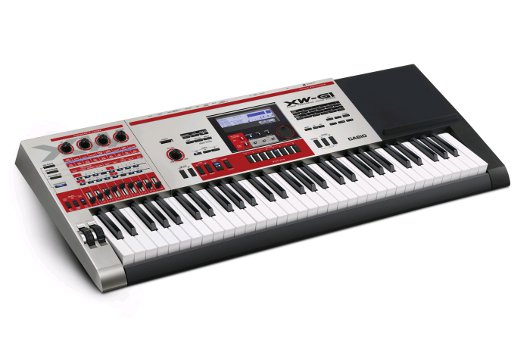 Casio follow up the release of the XW-P1 performance synthesizer with the XW-G1, a performance-friendly keyboard.

The recently released XW-P1 synth features sound sources similar to those in the hallowed CZ synth series that first hit the shelves in the mid 1980s. Now they are upping the ante and giving us the XW-G1, a synth with step sequence and sample loop capability, as well as fully editable sounds designed for DJs looking to add a live element to their performances.

At first glance the XW-G1 looks like a standard 61-key synthesizer, designed in three main parts. The far left section essentially deals with the tone-editing aspects of the machine; there are four knobs at the top and nine drawbar sliders at the bottom, all of which are fully assignable. In between are the parameter programs, which can be switched between via a set of three buttons at the side. The parameter program section also doubles as the step sequencer event editor, with 16 steps available and laid out in a manner similar to the sequence editors in famous groove boxes such as the TR-808 or 909. The right hand section deals with the navigation of presets and user banks, and also helps the user navigate around the various menus using the rubber buttons;  there is also a handy octave transpose function. The central section houses the main volume control and gives clear access to the three main functions of this synth: performance mode, tone editing mode and the step sequencer. It is possible to tap in the tempo you wish to work at, or simply use the cursor + and – keys. There is a display which helps the user track navigation as well as tempo, bar and beat for the sequencer – this is also where the main sampling record and playback functions are housed. There are further step sequence controls below to facilitate the navigation of various parts and switch between the eight patterns per sequence patch.

There are three main modes for the XW-G1 synth, aside from the sampling capabilities, the first of which is performance mode. The synth can be set up to play tones that the user has edited, or sequences and phrases that have been prepared using up to four tones and four separate zones on the keyboard. There is space for 100 user presets in addition to the 100 factory presets that the unit comes with, and the actual keyboard has a nice, springy touch, making it very easy – and fun – to play. Putting your own performance sets together is also an easy operation once you’ve grasped how to edit the zones and assign the knobs via the self-explanatory menu display.

The second mode is tone editing. A performance patch is of course made up of separate tones, and this mode allows the user to add some personality and get creative with sound; simply choose a tone to start with and hit the edit key. Use the cursors to navigate and the encoder to change parameters, then head over to the far left hand section to assign and experiment. A lot of the work flow here is in the vein of how synths were programmed in times past, where you really had to get used to scrolling through different menus. At times this is a bit daunting, but there is still plenty of functionality within this unit, and to set it free you simply have to get to know the logic of the menus. If during the editing process you come up with a hook or a phrase you want to recall for later playback, the phrase sequencer on the front panel makes recording these ideas painless – it’s as simple as choosing a tempo and hitting the record button to start the metronome. There is space for 100 of your own phrases as well as 100 preset phrases.

The third mode for this synth is the step sequencer function. The 16 step sequencer consists up of nine note parts and four control parts. There are limitations to the possibilities presented here, as five of those parts are dedicated to drums, one to bass, two for solo instruments and one for chords. However, the buttons are clearly marked and it is simple to create patterns using the step sequencer buttons on the left of the unit. There are eight patterns for each sequencer patch, making it easy to organise parts into interesting arrangement ideas to jam out as you play. There are different inputs around the back for getting sound into the machine’s in-built sampler as well, which helps broaden the palette of sound possibilities.

Around the back there is an SD card slot for saving work and a USB port (type B) for hooking up to a computer. You can get access the unit’s filters by connecting to the instrument audio in ¼” jack input; there is also a mini jack stereo input and a ¼” mic input with volume control. The main output is a pair of ¼” jacks with a headphone jack next to it. There is also MIDI in and MIDI out/thru, and power is delivered using nine point five volts of DC.

The Casio XW-G1 is, in simple terms, a production workstation with all the functions needed to get a good workflow going. There is quite a bit of choice in the market; workstations have been part of every major synth manufactorer’s product line since the advent of sequencing keyboards in the 1980s. This unit has its niche, however, and is aimed at the DJ who wants to add another dimension to their performances in clubs, and the preset sound sources generally reflect that. The design of the step sequencer is evocative of classic groove boxes, meaning the box exudes anair of familiarity. The ability to sample is a nice touch, and the usability of some of the functions, such as the phrase recorder and the way the step sequencer is organised, lends itself to on-the-fly music making. Some of the more advanced functions are a little trickier, and that might put off those who don’t have the time to really delve into this machine. (However, there is a clearly presented manual.) Although it would have been nice to have clearer access to the mix functions of the sequencer, the XW-G1 has all the tool you need: the more you put into this machine, the more you’ll get out.