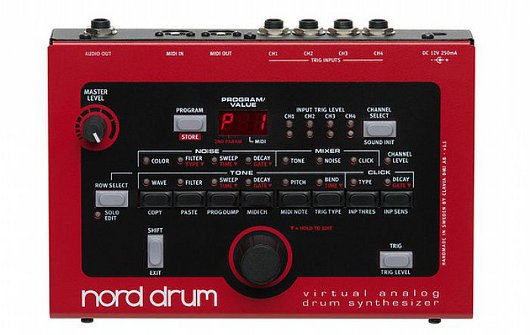 Nord, a brand famous for its keyboards and synths, returns to its drum and percussion technology roots with their all-new drum synthesizer.

Many years ago in Stockholm, Hans Nordelius and Mikael Carlsson founded a small company, and in a humble suburban basement they developed the first ever digital drum pad that could play samples. It was a hit, and the pair went on to develop the drum trigger system, which remains the industry standard interface for professional drummers wanting to broaden their sound by delving into the world of electronics. Having been leaders in the area of digital stage pianos and virtual analogue synths, it feels right that Nord should finally develop its own drum synthesizer.

On opening the cardboard box and padded foam protection, you’re presented with a familiar Nord-like red box with a step encoder at the bottom and 13 buttons, master volume and a simple three character digital display. It’s lightweight at just 350g, and everything is housed within a 199mm x 45mm x 42mm hard metal slanted box. There are four ¼” trigger inputs at the back, MIDI in and out, and single mono ¼” output, 12 volts of DC power, and the power delivery boasts interchangeable plug attachments (this means you don’t have to buy adapters for different types of plug sockets), and its robust build will find suit even the hardiest world-touring musicians.

Getting to grips with the interface is quick and easy, thanks to a manual containing a step-by-step guide. The ‘MIDI learn’ function is particularly helpful, as it helps the user communicate with the unit without having to go through pages of parameter changes. If you’re using this as a performance tool then you’ll be pleased to hear the drum synthesizer is designed to work with an array of different types of trigger pads. Double and accidental triggering by ambient vibration from outside (such as vibration from a drum stand when the unit is mounted) can be avoided by adjusting the threshold and sensitivity of the input. There are four channels of drum sounds that can be played at the any time via the trigger inputs or MIDI controller of your choice. The channels are organized into 80 programs or kits that can be easily accessed by the step encoder on the front panel, with space for 19 more user kits you can create and store yourself. 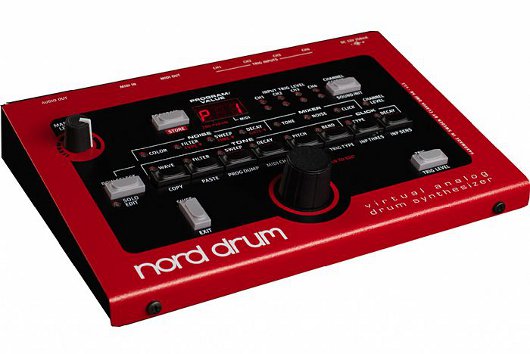 The sounds themselves are organic in texture, especially for an electronic device. This writer imagines that drummers and percussionists who love their acoustic gear will admire the quality and attention to detail that has gone into creating the earthy preset patches. Each sound has been created using three elements (aside from the filtering capabilities); Tone, which gives the sound its main body, and is fully editable with three analogue waves, nine drum-like waves or five percussion type waveforms; Noise, which adds an airy feel to the sound, and Click, which deals with the front end of your sound. A surprising amount of variety and creativity can be teased out of this small red box, and this is one of this machine’s key points, as it is not a sampling drum synth or groove box such as the MPC, Maschine or Beat Thang – you can’t simply upload your favorite sounds to use in whatever configuration you choose, so good, editable patches are a must.

There is a bespoke quality to Nord instruments and this is no exception; cracking electronic dance sounds or haunting log drums with washy sound fx or booming frame drums are all accessible, along with the ability to tweak them beyond recognition if you so wish. You can morph sounds as you play by making the filters work with the sensitivity of the velocity, and this writer’s guess it that you’ll end up wondering if there’s another way to work the sounds in real time without having to drop a stick or take your foot off a kick pedal. The unit is already so hands on, you feel like you want more; the box already has four trigger inputs – what would it be like with eight? It has only one single mono ¼” output jack, but imagine if you could work the stereo by adding panning sounds to your palette, or maybe multiple outputs, which would be very handy for sound engineers in live situations. But we shouldn’t be greedy – with its small and portable size and hands-on tweakability, these shortcomings are a minor concern.

The Nord drum synth is borne of the same mindset that created interesting electronic drum ideas back in the 1970s – most notably the syndrum and synare – or even the Simmons electronic drum kits of the 1980s, made famous by acts such as Spandau Ballet and Visage. A syndrum clone by Troots from France is on the market but the obvious rival to Nord here is the Roland V Drum system. However, Roland’s instrument is designed to be incorporated into an acoustic kit, or act as a replacement for one, rather like the old Simmons kit of yesteryear. Nord have come up with a smaller and more hands-on machine, which is clearly geared towards the discerning musician who wants to experiment with their set up and broaden their palette of sounds. Not that this unit can’t be a stand-alone instrument; it’s possible to plug a kick drum trigger in and use the remaining three triggers for snare and hi-hat patterns, but it would be better served for this purpose with a few a more trigger inputs. With its scope for customisation and ease of use, this small unit will no doubt be a popular way of creating singular sounds for years to come.