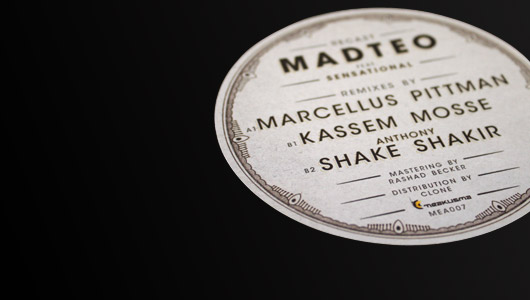 In a week where Night Slugs were all over your social network feeds with exciting news of new material from Girl Unit and Jam City on the horizon, the London hub delivered another telling factor in the growing sense they are going to dominate proceedings in 2012 in a fashion similar to their astounding breakthrough year.

The debut release in their new Club Constructions series saw 50 per cent of the Night Slugs decision making team, L-Vis 1990, back at the controls for the first time since Forever You, and the five raw analogue ghetto house tracks Mr Connolly produced could be seen as a relentless riposte to those questioning the polished direction of his debut album Neon Dreams, as well as laying down a quality marker for subsequent entries in the series.

Speaking of Night Slugs, there were definite parallels to their recent White Label from Helix in the new Livity Sound release from Kowton, with the A Side in particular coming on like a much darker variant of the US producer’s “Drum Track” ripping away at your cerebral cortex via turn of the century grime strings and savage claps. Demonstrating the disregard for fad that’s characterised the Livity Sound output to date, Kowton uses the flip for a more stripped back affair that sounds best in a basement space.

Hessle Audio continue to creak back into release action after a relative fallow period, ushering perhaps the label’s most unsung member into the spotlight as Elgato graced the world with some new material in the form of Zone. The twelve inch features two tracks that circulate around the 120bpm mark and have been described by the figurative pen of Scott Wilson as “bass-infused warm up vibes” – for a fuller deconstruction head over to his review here.

Perhaps the most impressive release of the week was Madteo’s ReCast from the Meakusma label (pictured above) which called on some of the finest producers currently out there to totally fuck up with some material from the Workshop and Hinge Finger artist’s back catalogue. Vastly differing in their approaches, we still can’t decide who out of Marcellus Pittman, Kassem Mosse and Anthony Shake Shakir did the best job.

Swift recommendations follow with those of resolutely house persuasion covered by Bicep’s all conquering New Jersey bumper”$tripper” finally arriving courtesy of those Love Fever scamps, Chairman of the Larry Heard Appreciation Society Jamie Read debuted on the Chiwax label with the excellent four track Don’t Mind What EP and Frank Timm continuing his incendiary escapades through cutup disco house as either Soundstream, Soundhack or T.S.O.S. on the essential Sound Sampler Vol 1.5. Those who prefer their disco to house should check the Kenny Hawkes tribute from Idjut Boys, Soft Rocks Secret Circuit and Johnny Nash adding their own flavour to Tiago’s Sea Power & Change project and another slice of Balearic delight from International Feel courtesy of those Boys From Patagonia.

Over in the digital realm, Darren Cunningham aka Actress delivered his keenly awaited third album, R.I.P. Although it uses much of the same, occasionally abrasive sonic building blocks the London-based producer has been developing for many years, the pastoral tones of tracks like “Uriel’s Black Harp” and the Alva Noto styles of “Jardin” make R.I.P a surprisingly graceful album. It may not be techno as many will know it, but Cunningham has never made techno in the traditional sense anyway – and it’s clear that he’s only just beginning to realise the musical forms that have been swarming inside his brain for years.

While we’re discussing esoteric geniuses, Tom Jenkinson is back in town and on utterly deadly form after some years in a strange jazz-funk-pop no mans land. If you love Squarepusher for his tearout electronica tendencies, then “Dark Steering” will make you very happy indeed. Harking back to Do You Know Squarepusher, there’s elegant pads and dramatic synth work getting harassed on all sides by nasty digital squelches and squiggles, all grooving to a low-slung tempo.

If there was a techno museum – how cool would that be? – we’d suggest handing the keys over to Aroy Dee and making him the chief curator. The Dutchman has long been one of the main European purveyors of deep, Detroit influenced techno – and on Lost Digits, he again reminded us why he has earned that distinction. Elsewhere, Outboxx’s Jacob Martin donned his 2-steppy Hodge alias for Immerse, with the title track from The Fall EP a summery slice of swung percussion and funk infused textures which at times recalls Space Dimension Controller’s intergalactic timbres. That’s another name to add to Bristol’s already bursting list of talent, then. Other digital essentialness came from Cupp Cave, Shifted and the aforementioned club bangers from L-Vis 1990.

On the CD front, Levon Vincent’s imperious Fabric 63 mix hit the shelves. The erstwhile New Yorker’s mixing and production style – dubby, fluid and loose, but prone to periods of paranoid darkness and intense moments of sun-bright clarity – is tailor-made for an album like this. As a result, Fabric 63 is a memorable journey that touches on all of these traits, from the spine tingling, dubwise deepness of his own, to the elastic, melody-driven rubberyness of Joey Anderson, reflective groovery of Jus-Ed and growling menace of Anthony Parasole.