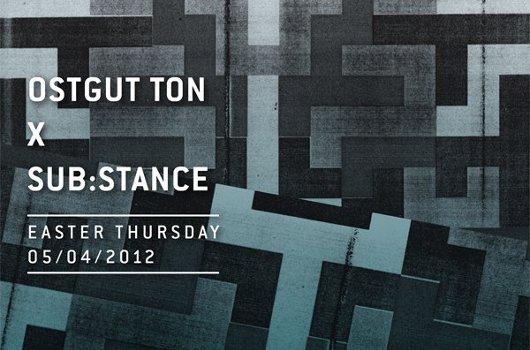 This Thursday sees Berlin’s premier techno label, Ostgut Ton, go head to head with Berghain residency Sub:stance at Hackney Downs Studios, and we have a pair of tickets to give away to one lucky reader.

Ostgut Ton has hosted label nights in London before, but promoters Electric Minds and Broken & Uneven have decided to go one step further and bring Berghain residency Sub:stance along for the ride, bringing the two institutions together in London for the first time. Room One will feature Ostgut Ton’s Ben Klock, Ryan Elliot and Tamo Sumo, while room two will feature Hotflush boss Scuba, Skull Disco’s Shackleton and Planet Mu’s Kuedo. In anticipation of the event we asked Klock to interview Scuba (and vice versa) – check out the results here.

To be in with a chance of winning, simply send the correct answer to this question to competitions@juno.co.uk: What’s the name of Scuba’s recent album, released on Hotflush in February? Entries will close at Midday on Thursday, April 5, and the winner notified by email soon afterwards.