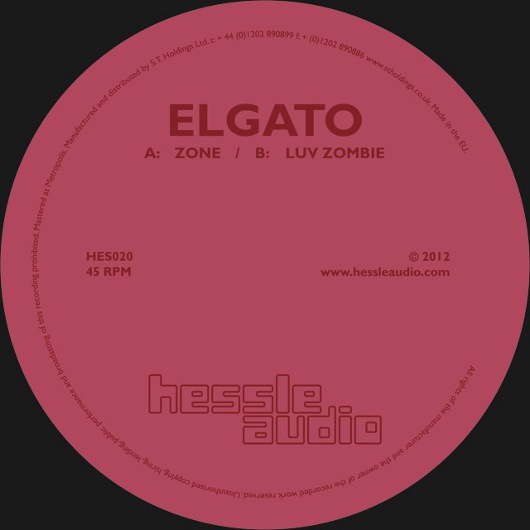 UK label Hessle Audio has announced its 20th release, with Elgato at the helm for a two-track 12″ due out later this month.

The more perceptive among you will have noticed the lead track from “Zone/Luv Zombie” opening label boss Ben UFO’s recent mix for Little White Earbuds, with a treated vocal bringing to mind Darkstar’s “Aidy’s Girl’s A Computer”. This is flipped by another stripped-back track, with “Luv Zombie” carrying a soulful garage-noir swagger thanks to a heady mix of shuffling rhythms, 80s house vocals and murmurings of sub-bass.

Undoubtedly the most elusive of artists on the Hessle roster, Elgato made his debut on the label back in 2010 with the Tonight EP and since then examples of his work have been restricted to appearances on compilations or mixes. “Music” for example appeared on both the Hessle Audio compilation 116 & Rising and the Pearson Sound Fabriclive mix, whilst the still-unreleased “Dunkel Jam” was a highlight of Ben UFO’s Rinse: 16 mix from last year.

Hessle Audio will release “Zone/Luv Zombie” by Elgato on April 23 on vinyl and digital formats.

A. Zone
B. Luv Zombie