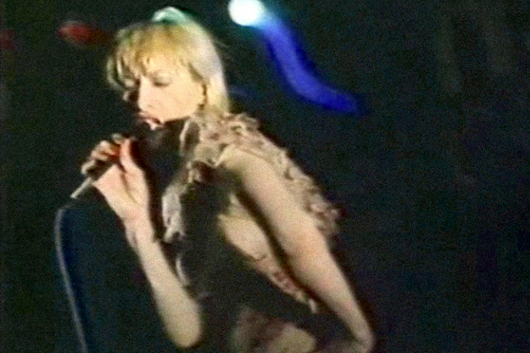 Characterised by the juxtaposition between their hard edged industrial sound and the fragile vocals of French frontwoman Regine Fetet, the band surfaced in 1984 with the Dirty EP released on the Survival imprint and the title track from that release features on the forthcoming Minimal Waves Tapes Vol 2 compilation that Minimal Wave boss Veronica Vasicka has curated for Stones Throw.

One of the many bands to profit from the studious attentions of the sorely missed John Peel, Hard Corps signed to Polydor in 1985 and were granted the opportunity to work with two iconic producers of the mid 80s period in Martin Rushent and Mute’s Daniel Miller. These recording sessions resulted in just one single in Je Suis Passée due to Polydor’s lack of promotion, however it has since become a cult track, showcasing all that is good about the band and was recently included in Trevor Jackson’s Metal Dance compilation. The sleeve notes for that go into further detail regarding the provocative nature of a Hard Corps live show with bassist Hugh Ashton revealing “Regine dressed as she wanted, in leather, a bit S & M and was prone to lifting her skirt and removing her clothes”.

The band disintegrated in 1989 after touring with both The Cure and Depeche Mode and in typical Minimal Wave fashion the forthcoming album, entitled Clean Tables Have To Be Burnt includes rare unreleased versions of Hard Corps tracks, fully remastered and pressed on 180 gram vinyl. Limited to 999 copies, the album comes replete with a double sided inner sleeve featuring a beautiful group shot and all of Regine’s lyrics.

Minimal Wave will release Clean Tables Have To Be Burnt by Hard Corps in early April.