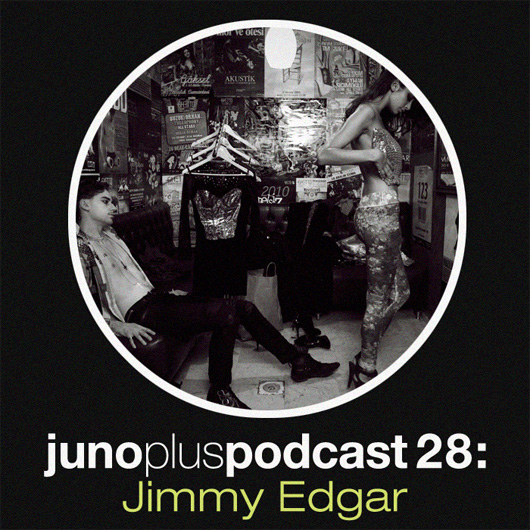 Juno Plus Podcast 28 comes from one of the most consistently interesting, adventurous and singular artists of recent years: Jimmy Edgar.

Since his emergence on the Warp label with the still fresh sounding Access Rhythm EP in 2004, Edgar has demonstrated an approach to music that is chameleonic to say the very least. His two subsequent albums for the aforementioned Warp imprint as well as releases on Semantica, Nonplus, Glasstable and many more under a variety of aliases range from experiments in abstract electronics to breakneck Detroit electro, sub 110BPM deep house and sleazy electro-funk.

We’re not alone in saying this man has been on our radars for a few years now, but it was perhaps Edgar’s masterful live show at last year’s edition of Bloc Festival where the Juno Plus editorial truly fell under his spell. An utterly storming, unhinged live show was our highlight of the festival and effortlessly slipped between techno, jungle and dubstep tempos.

In addition to an excellent podcast, which features a heady mix of machine-driven sleaze, Edgar was also kind enough to answer some questions via email.

There’s an interesting concept to your new single reflecting your dual residency in Berlin and the US; can you expand on it?

And will this theme be represented further with the forthcoming album?

Yes, the theme that we are all one, in many ways. Countless synchronicites came to fruition during this process and it’s been amazing to see how things pan out from it. The music is a lot more futuristic in my humble opinion than my other music, which played a lot with retro music, especially R&B.

How did your relationship with Hotflush come about?

Dinner with Paul (Scuba). Travis (Machinedrum) introduced us. We were both fans of each other so it just sort of worked naturally to our favor. I feel as though I have come full circle, working with big/major labels like Warp and !K7.. well relatively major. I much prefer working closely with friends.

Scratcha DVA recently claimed it would be ace to live in Berlin and pop round your gaff for some sugar and live next door to Machinedrum, does the city feel that top heavy with music talent to you?

Yes, it’s a bit overwhelming. The issue is that it’s so easy to live in Berlin that you tend to get a lot of laziness. I don’t want to dwell in the negative, not that it’s necessarily negative. Yet, it’s a big change from the rat race that is NYC, which I lived for almost 5 years. Times are going faster these days and there is no time for sitting around. I choose to stand up and change consciousness, if at all to inspire. If one person is inspired then I did my job. How did the hook up with Pilar Zeta come about? Would you say her emphasis on 80s sci fi movies is intrinsically linked to the music on the LP?

We both come from Sirius in some alternate timeline somehow, so it was sort of meant to be. I think we were both aware of each other before we met anyways. The link that we have, relating to design, would be the alchemical, occultist, mysticism side of things.

Any plans to revisit the Creepy Autograph project?

Not at the moment, I get very few requests for this. This project was born out of a certain studio set up that I don’t really utilize anymore. If given the opportunity to sit in front of vintage equipment again, sure any day I would. But, I’ve gone down the technology road and I’m more interested in the modular side of analogue equipment rather than dusty old vintage technology.

Tell us about your Juno Plus podcast – where and how did you put it together?

I used my intuition, meditated before hand. It mysteriously appeared an hour later, I don’t remember much but I did go back and make a track list. Most of the tracks are edits of my own, mixed with pleasure. All my love.

Juno Plus Podcast 28 – Jimmy Edgar by Juno Plus on Mixcloud