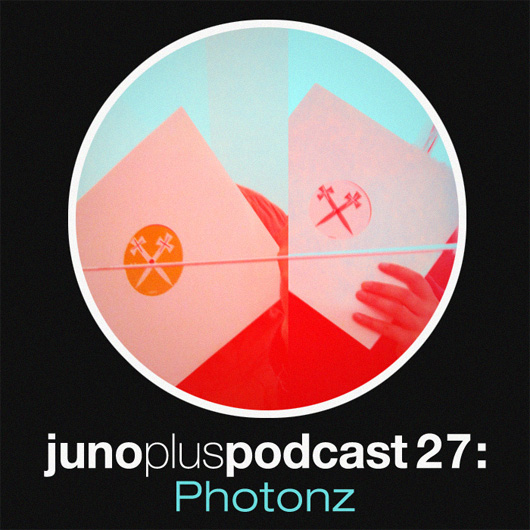 For the 27th Juno Plus podcast we extend our worldly gaze to Portugal, and call on one of the country’s best loved electronic music outfits, Photonz.

One of several acts to remain on the Juno Plus radar after surfacing via Andy Blake’s Dissident label, Marco Rodrigues and Miguel Evaristo’s working relationship dates back to meeting at high school in the late 90s, bonding over a love for music and “because everyone else was into stuff we didn’t care about”. This soon developed into a desire to DJ, something that was indulged by a small bar in their hometown Almada,  “were they let us do whatever we like” and it wasn’t long before they began dabbling in production.

In the period subsequent to a move to Lisbon and the formation of a DJ collective called ZONK with some like-minded individuals, Photonz have steadily built up a catalogue of incendiary productions across labels such as Dark & Lovely, The Republic Of Desire, Astrolab and Get The Curse. They also gathered a increasingly diverse pocket of remix commissions in recent years, with the likes of Shake Shakir, Clouded Vision, Raiders Of The Lost Arp and Heels Of Love benefiting from their production touch. Photonz also earned something of a stellar underground reputation here in London, memorably headlining reliably raucous Blogger’s Delight parties at Camden’s Lock Tavern.

In recent times Photonz have redoubled their efforts, establishing their own One Eyed Jacks imprint, which delivered the humongous chunk of Fulton style dancefloor terror known as Lamborghini Funk last year. That release remained in our minds, scoring a spot in our end of year charts, and a marker on our podcast hitlist. They’ve already emerged with one of our favourite releases so far this year in the unhinged WEO for new Lisbon based label Principe, whilst they are soon to grace the do-check Don’t Be Afraid imprint with the equally excellent EP The Love Spectre.

The aforementioned releases and what they have planned for this year lends the impression that Photonz are on the cusp of doing great things this year, and their mix for Juno Plus crams 19 tracks into under an hour in truly thumping fashion veering from Chris Carter to vintage CJ Bolland and includes plenty of forthcoming, exclusive material from their label One Eyed Jacks. Marco from Photonz was also kind enough to answer some questions too.

Hi Marco, you’ve just dropped WEO on the new Principe label, could you tell us some more about it? Our understanding is Principe was established to represent all the different strands of music in Lisbon?

Príncipe is a label run by our good friends Márcio Matos, Major and the Gomes brothers, from Filho Único and Gala Drop (Nelson Gomes). Márcio and Major are both part of this impeccable local record shop called Flur, in Lisbon, and we are all part of a DJ collective called ZONK – we’ve been DJing together regularly since around 2008. Filho Único is an association that plays a vital role in Lisbon, organizing some of the most cutting edge concerts in town. The label started because the true, genre-less pulse and grit of the Portuguese underground dance scene wasn’t being properly represented. Most dance labels here were happy to put out release after release of pseudo-deep, over-sophisticated, ego-massaging dance muzak.

We believe the artist responsible for the Principe cover art is something of a legend in Lisbon?

Márcio Matos, aka Javenger Dourado, aka MM, aka one quarter of ZONK, is the nicest and most talented dude we’ve ever met, definitely. He’s been designing amazing, non-standard flyers for the ZONK parties since the beginning – he also designed the One Eyed Jacks and Príncipe visual identities and continues to do so on each release. Márcio co-organizes these parties called PISTÃO!, dedicated to new, underground and experimental live-acts. Amazing DJ with the most creepily spot-on dancefloor intuition we’ve ever seen – he’s that guy that switches off your deck, plays the weirdest tune and everyone goes wild.

“Lamborghini Funk” was one of last year’s most memorable tracks for me as it didn’t neatly fit into any one box, what was the inspiration for it?

Not sure. We were just trying to make a hip-hop beat for a rapper friend of ours, but it turned into this weird funk track that we could play in our sets.

As part of the Dissident alumni, you must be happy to see Mr Blake actively involved in the keep vinyl alive campaign with three labels on the go. Any plans to rekindle your working relationship?

Well, we haven’t sent him that much unsigned music since Dissident ended, with our own OEJ and stuff goin’ on, but we definitely keep in touch and exchange files and stuff. We respect him hugely, and will always feel like a part of this beautiful thing called Dissident – we’re pretty grateful about that! His new labels are truly sick too, and we’ll definitely send more music his way again in the future. We had a listen to the forthcoming releases of In Plain Sight and it’s gonna devastate 2012. No doubt about that.

What’s on the horizon for Photonz and your label One Eyed Jacks this year?

We have a lot lined up, and for the first time that includes lots of music that we didn’t make ourselves. Keep an eye on the debut releases from the excellent RoundHouse Kick (with a remix by the super dope Auntie Flo), the synth-wizard Pal+ ( jackmasters Snuff Crew in the remix), a collab between us and Niagara, the enigmatic and anonymous Mharia and more. This year will definitely be a test to our label-running skills. We’re excited!

How much emphasis do you place on ensuring you release music physically? It seems that we are in a weird place at the moment, with people from varying generations having vastly different ideals on how the medium of music should be marketed as referenced in the huge dialogue that came out of Swayzak’s recent Facebook outburst.

We love the format, it’s what we use as DJs, so we can’t really think of it as a collector’s item. For us it’s a tool, the best one. Nothing against digital if it’s lossless or 320 promos sent from labels, and we do use some CD-R for unreleased stuff. We’re reaching a new and exciting paradigm for the information flow, no doubt about it, and as much as we suffer lots from piracy, we don’t think censoring the internet is the answer. Fuck SOPA, ACTA, PIP, PL118 and all that idiotic stuff. We believe that the copyright lobby is using the artist as an excuse to make these crazy witch-hunts, offering governments the perfect opportunity to mess with people’s rights and with the free flow of info. On the other side, if the average web-user wasn’t such an irresponsible little twat, with no real consciousness, then statistics wouldn’t support the intentions of these lobbies. Most likely we’re just in the middle of somewhere, headed to a time where the web-user will know the importance of this content on his/her life and will be more involved in making sure this music continues to be made and properly distributed.

It’s clear from the mix you’ve done that your appreciation of electronic music is pretty far reaching, who’s really pushing the barometer for you production wise at the moment?