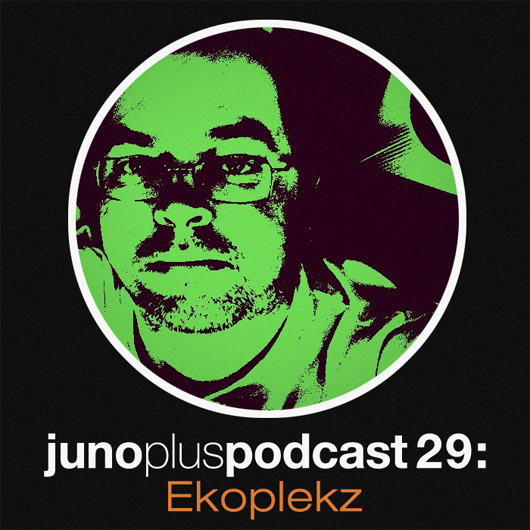 Ekoplekz steps up for Juno Plus Podcast 29 with a mix that carves its own distinct line between King Tubby and the Radiophonic Workshop.

Nick Edwards has been an important part of Bristol’s musical landscape for some time now, initially as a blogger on Gutterbreakz (he still blogs regularly here), before coming to prominence as a producer with a flurry of releases in 2010 and 2011, including the Intrusive Incidentalz Vol.1 LP for Punch Drunk.

This week he released the Dromilly Vale EP on Public Information, with the record’s title a nod to “an imaginary recording studio that is a cross between King Tubby’s on Dromilly Ave, Kingston, JA and the Radiophonic Workshop’s Maida Vale studio in London”. Thrillingly, his mix for Juno Plus further explores this theme, pairing dub tracks from Prince Jammy, Lee ‘Scratch’ Perry and more alongside the work of Radiophonic tinkerers Dick Mills and Malcolm Clark. Ekoplekz was also kind enough to answer some questions we emailed him in vivid detail.

First of all, how was the mix recorded? It’s usually a boring question but we imagine with someone like you the answer would be considerably more interesting…

Well, I wouldn’t claim it was more interesting, but probably a lot different to how most other podcasts featured on your website were created. For a start my mixes are never based around BPM matching, in fact I deliberately demote the importance of beats, preferring to focus on resonant contrasts, stylistic gear-changes and textural blending. I don’t claim its a better way of doing things, just a different way.

From a technical aspect, I guess its a slightly more personalised variation of the decks+fx+dub siren live mix. It’s just me spinning a few records and CDs, with a liberal sprinkling of improvised electronics over the top, all recorded live in one take. I always have additional reverb, echo and equalisation at the ready, and on this occasion there’s quite a bit of wild experimenting with the new Korg Monotron Delay, which I’ve only just bought (always nice to bring in a new toy!). Several of the tracks featured here are by friends of mine, and it’s nice to just jam along with their recordings, even if it’s just me scraping the springs of a reverb tank.

Conceptually, this mix is linked to my new record, the Dromilly Vale EP. All my EPs are named after places, but this is the first one where the place is fictional – an imaginary recording studio that is a cross between King Tubby’s on Dromilly Ave, Kingston, JA and the Radiophonic Workshop’s Maida Vale studio in London. The EP tries to imagine what sort of music might be created there, whilst this mix imagines what sort of music they might be playing there.

The whole basis of techno music was founded on Derrick May imagining what Kraftwerk jamming with George Clinton might sound like, whereas on this record I’m wondering what King Tubby jamming with Radiophonic guys like Dick Mills and Malcolm Clark might sound like, which isn’t that big a stretch when you consider they were all roughly the same age, at their creative peaks in the 1970s, and all inveterate tinkerers with electronics. They may have been geographically and culturally separated but I think, if they’d ever met, they would’ve all had a lot to talk about. We only know King Tubby’s work is relation to the multitrack reggae tapes he used as raw material, but what might his own electronic music have sounded like if he was building it all from scratch? Undoubtedly it would’ve been better than anything I can come with, but still I try to imagine the possibilities, hoping that, by creating these little fictional histories, something new and unexpected will leak out.

What’s your recording setup like – you record with a lot of analogue equipment, but what have you got and what are your favourite bits of kit?

When people talk about ‘analogue’ studios, they usually mean very expensive and full of classic, vintage gear. That is not the case with me. I would describe my studio as an intentionally lo-fi, pre-digital shithole. Most of my gear is cheap junk. I don’t spend hours fiddling with banks of valve compressors or any of that stuff, I just record very quickly on a battered old four-track tape machine that I’ve owned for many years. Bits are always falling off it, and I never clean its recording heads. In fact, the natural, inevitable pull of entropy on my equipment is all part of what makes my sound. Its a total rebellion against the cleanliness, immaculate production and functional politeness of much electronic music today. I don’t wanna go into too much detail about what specific items I use, but essentially I try to avoid anything that encourages programming or automation of any kind. I like to play and modify everything by hand, in real time. I make a few primitive loops with delay pedals, and sometimes use very simple voltage controlled sequencers to generate short repeating phrases to jam against, but absolutely no MIDI or other digital control mechanisms. And I never save anything. Every time I switch on the machines, whether in the studio or on stage, I’m always generating new material. I like to capture moments of raw creativity wherever possible.

Your Westerleigh Works EP was a big hit with us – whilst it was released on Perc Trax, you haven’t really come from a techno direction – how did the hook up with the label come about for the release?

Ali Perc contacted me shortly after my first Punch Drunk release (the “Stalag Zero/Distended Dub” 12″) which he had rather bravely placed at #1 in his chart for DJ magazine and asked if I was interested in doing something for Perc Trax. I didn’t make any intentionally techno-based music specifically for him, I just sent him a few unreleased tracks that I had already recorded and let him pick his favourites. So that EP is basically just Ekoplekz music, filtered through Ali Perc’s excellent sense of taste. I don’t consider it to have anything to do with generic techno music, although the lead track does perhaps give a subtle nod to Basic Channel. Its been good for me because its introduced me to a different audience, and I think its been good for Perc because it proves he’s serious about taking his label way beyond the confines of dancefloor functionality that stifles so many genre-based labels, towards a more personal vision of what electronic music can be.

You’ve recently been doing some performances with Bass Clef as Ekoclef – how did they go down?

Well, there is always a big element of risk when I play live, because I’m an improviser. There’s no pre-prepared material, I create spontaneous new music with each performance. The Ekoclef gigs were the first time I’d tried that improvised approach with someone else and I did feel the performances were a bit shaky in places. Ralph and I are both used to performing as solo artists, and were still learning how to bounce off each other, and give each other space, and maybe we were trying a bit too hard. But then we’d start to relax a bit and actually listen to each other properly and that’s when those moments of breathtaking clarity emerged, when everything suddenly fell into place. I really enjoyed the challenge, and I think the audiences enjoyed the unpredictable ebb and flow. Maybe we tried their patience a bit sometimes but I think we got away with it! Hopefully the Ekoclef adventure will continue, because I think it can only get better and better.

Juno Plus Podcast 29 – Ekoplekz by Juno Plus on Mixcloud