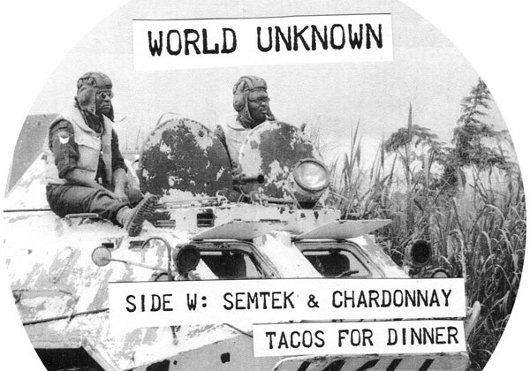 Andy Blake and Joe Harts’ World Unknown label has unveiled its fifth release, a split 12″ featuring two more tracks primed for use at the duo’s Brixton club night and beyond.

The imprint has quickly established a reputation for sweaty, EBM infused mid tempo house and techno, with releases from both established acts like Naum Gabo and Jam Factory and unheralded producers such as Apiento, Timothy Fairplay and the magnificently monikered Franz Underwear.

Adorning the W side – there are no A and B sides on World Unknown 12″s – is a collaboration between Don’t Be Afraid boss Semtek and the mysterious (to us anyway) Chardonnay. Blake says he’s been road testing the track at recent World Unknown gatherings, and reveals that “it always sends the club somewhere very special and ever so slightly scary”.

On the U side, Glaswegian Scott Fraser – who you might recall from a rather excellent recent Virgo Four remix alongside Capracara – debuts on World Unknown with “Remains The Sames” which is markedly slower and altogether more chugging with memorably crunchy percussion that has by all reports already found a snug place in Andrew Weatherall’s record bag.

W. Tacos For Dinner
U. Remains The Same