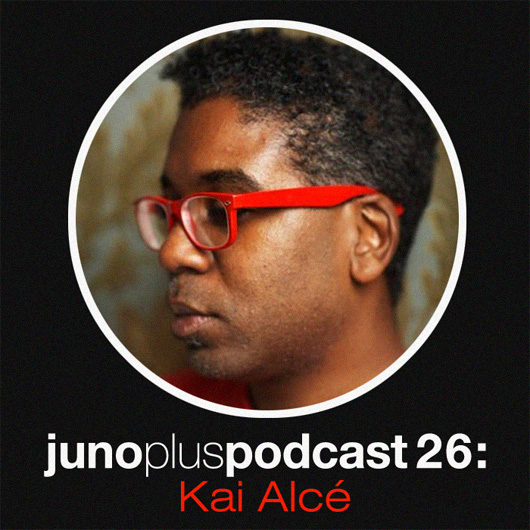 With roots that stretch across America, from Atlanta to New York and Detroit (hence his label’s name, NDATL), Alcé is tied closest, musically, to the Motor City. He was hired to do lights at the city’s legendary Music Institute at the age of 16; he has since gone on to have a glittering career in production, with releases on iconic labels including Track Mode, Mahogani and FXHE.

Over a two year period from 2009-2011 NDATL released a series of 12”s to honour the Detroit Music Institute’s 20th anniversary. Described by Slow To Speak chief Paul Nickerson as “definitive aural document of the long-lost but never forgotten Music Institute of Detroit”, it featured a host of previously unreleased productions from early Motor City heroes such as Derrick May, Chez Damier, Alton Miller and Juan Atkins, all of whom performed at the legendary club.

Following a timely ‘Bonus Beats’ addendum release on FXHE of Jive Time, his ocean deep collab with Omar S late last year, Alcé will open his 2012 account with a debut EP for Spanish deep house connoisseurs Deep Explorer. His mix for Juno Plus, entitled The Lighter & Darker Side Of Things, is a sumptuous, impeccably mixed jaunt through vintage machine soul.  Kai was also kind enough to answer a few questions we emailed him recently.

You’ve got allegiances to Detroit, New York and Atlanta; how did your upbringing and time in each city help shape you and your taste in music?

Well in New York I grew up in the midst of disco and the emergence of hip-hop, then in my pre-teen years I moved to Detroit and got into the high school party scene. I linked with Chez Damier, we were hangin’ out at the KMS/Transmat/Metroplex building and eventually worked at the Music Institute. I was also travelling back to New York and also checking out Chicago, so I saw the main three breeding grounds of this sound during their golden years. I was seeing Ron Hardy in Chicago one weekend, the heading back to Detroit and checking the MI, and going to New York places like MK’s Red Zone Mars. Then I moved to Atlanta, a place where house music had no real roots, and I was able use what I learned from my travels to not only mould my own sound but the sound that most associate with Atlanta.

I spoke to Marc Kinchen recently and he mentioned you were instrumental in hooking up the MK reissue on FXHE last year – is that right? How did that come about – it seemed the time was right to give MK some exposure to younger house fans who perhaps didn’t appreciate his influence.

True, that was Omar S’s idea; he’s always respected and played MK’s music and wanted to release his favorites. So I told him that me and MK have been buddies since the KMS days and that would be no problem. I got em on the phone together the rest is history! Omar plans on resurfacing some other lost gems as well and I plan on helping him achieve that.

You were closely involved with the Detroit Music Institute – what did you do there how important has that been in your musical education?

I actually did whatever I was asked to do, ranging from coat check, working the lights and making a liquor runs to the store. It was very important to me in learning how to DJ – not so much the technical side, but the delivery and crowd/DJ connection side of things.

Is there one experience at the institute that stands out above all else?

Of course there are a few, one is when the guys from Depeche Mode came thru after a gig and were like WTF! No alcohol! Another was the closing night; it was crazy hectic, cameras, people from all over the world, and as Derrick is about to get on he tells everyone “Alright now get out of the booth!” as we start to file out he said “Except you Kai, come work these lights!”

You released a series of 12”s to honour the Music Institute’s 20th anniversary featuring some heavy hitting producers – what was your motivation to do this and were you pleased with the reception is garnered?

I had been in the studio workin’ on a track that just put me in the MI mind state and the idea was born, and the response has been phenomenal! I can’t thank everyone involved enough for their input. I’m currently putting together a CD comp that will feature most of the tracks from the 12’s and maybe a few extras, plus in-depth accounts from the DJs involved and some never before seen pics.

What have you got coming up on your label, NDATL, and elsewhere in 2012?

Finally, what’s the reason behind the name of the mix? (i.e. The Lighter & Darker Side Of Things)

I felt that music represented the two sides of my liking, although all of it is deep!

Juno Plus Podcast 26 – Kai Alcé by Juno Plus on Mixcloud