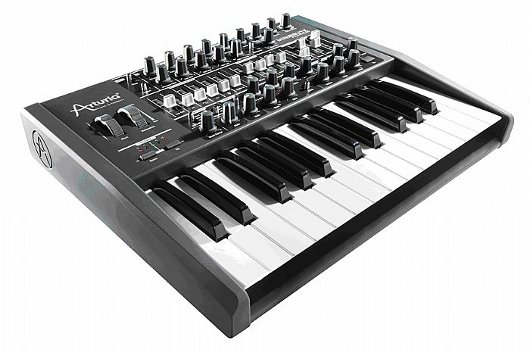 Arturia are most well known for their superb softsynths – their virtual recreations of synths like the Minimoog, ARP2600 and Prophet-5 are important parts of many a producer’s arsenal (or at least those that can’t afford the secondhand prices or the upkeep), mainly due to their software being the closest you can get without owning the real thing. The Minibrute isn’t their first foray into hardware – the Origin keyboard offered all their software did inside a solid hardware package – but it does differ in that it’s the company’s first fully analogue device.

With a colour and form reminiscent of Roland’s classic SH-101 (particularly in its colour and inclusion of sliders to modify its envelopes), the Minibrute has a two octave keyboard, a 100 per cent analogue audio signal path with a VCO wave mixer, a Steiner-Parker multimode filter, as well as Metalizer, Ultrasaw, and what Arturia describes as the “Brute Factor”. In line with most current analogue offerings, it comes complete MIDI, CV and USB connectivity, demonstrated in the video below.

Of course Arturia aren’t the only ones competing in this market – the Dave Smith Mopho keyboard and Moog Phatty range have already proved to be popular with those wanting an analogue synth on a budget, but the projected price point of €499 could be enough to sway the decisions of many.

No firm release date as yet, but keep an eye on the Juno product page for updates.