The venerable UK label revealed the news today via the above YouTube video for album track “Com Touch”. It’s been three years since the producer, best known simply by his surname, released his last long player, Totems Flare. The 14-track Iradelphic was produced across a range of disparate locations, namely Australia, Berlin, Wales, Brussels, Cornwall, Norway and London.

Quotes attributed to the producer on the Warp website read: “I’ve been hunting down that elusive paradox. To create something that didn’t sound like what I’ve done before. But was also unmistakably me. It’s quite a maddening task.

“I don’t think I’ve ever recorded in so many diverse locations; there was a lot of field recording going on in Snape, Sussex, harpsichords and orchestral drums. All recorded with a variety of tools. From £8k Cold War microphones, bling studio set ups, to laptop microphones, crumbling cassettes, Dictaphones. It all got used.

“Then a massive recording session in Wales with Bibio, only some of this is used on the album.

“I played a lot of guitar after leaving England, played pretty obsessively everyday for about a year. I never played it before but I picked it up pretty quick I reckon. I’m just stubborn with stuff like that.

“It feels like it’s been a massive test, a huge, all engulfing self imposed boundary that I had to step over, can I transform all this wild instrumentation and confounding, chaotic will into something with a monolithic unity, can I bring all of these seemingly contradictory shifts in mood into a homogenous whole? I hope I’ve nailed it.”

Warp Records will release Iradelphic by Clark on April 2, 2012. 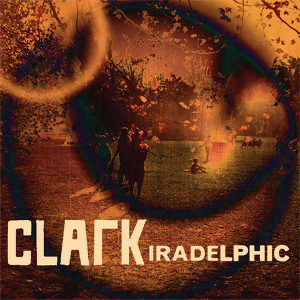