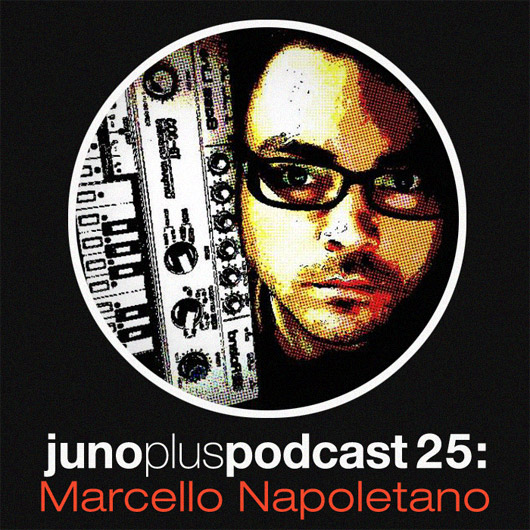 The Juno Plus Podcast series enters its second year of life with a bump thanks to a rattling mix from the ever excellent Marcello Napoletano.

The Italian producer and DJ requires little introduction to anyone with a cursory knowledge of contemporary house music, sporting a back catalogue of releases and remixes that stretches across revered imprints such as Mathematics, Laid, Bosconi, Quintessentials, Use Of Weapons and Rush Hour’s subsidiary imprint Hour House Is Your Rush. Indeed the latter release, Everyday Madness, remains one of our favourite twelve inches on the Amsterdam label.

A master of dusty authentic house grooves and decidedly rough jack material, the Lecce born producer was one of the first names on our list when the decision to begin a podcast series was made all that time ago. Given Napoletano’s somewhat elusive nature it’s understandably taken some time to secure and broadcast what is a quite brilliant mix of music that truly demonstrates the Italian’s signature skewed sound.

Recorded live in one take using only vinyl, Napoletano was actually ill at the time and listeners with a more acute sense of hearing might notice him coughing at several points throughout the bumping 75 minutes. Those eager for some new twelve inch material from Marcello will be pleased to hear that the producer will return to his rarely used alias Michael Ferragosto later this year with an EP of undoubtedly visceral jack material for Steve Poindexter’s Muzique imprint.

Juno Plus Podcast 25: Marcello Napoletano by Juno Plus on Mixcloud

No tracklist was provided.