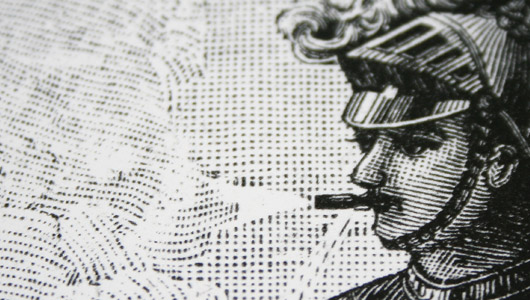 The spectre of a certain Norwegian loomed large on Juno Plus this week with Todd Terje gracing no less than three labels with his Midas touch.

The much anticipated arrival of It’s The Arps, Terje’s debut release on his newly minted Olsen imprint was met with a suitably feverish response as every last copy slipped out of the Juno warehouse with little hesitation. Terje also contributed a quite brilliant remix of Bjorn Torske’s “Langt Fra Afrika” for his compatriot’s Oppkok (remixes) EP on Smalltown Supersound and saw his previously digital-only horizontal version of “Snooze4Love” get a much needed physical release on the Running Back released Digital Dubplates 10″.

Gerd Janson’s imprint was also very prominent in our thoughts this week as the label released some long overdue new material from Dissident alumni Helium Robots. Sporting the above smartly dressed artwork, the Jarza EP will appear on most people’s radars thanks to the two trademark Theo Parrish Translations (remember Theo doesn’t do remixes), however the original tracks from Helium Robots are intriguing enough to warrant investigation and bode well for a vaunted debut album from the producer.

Ah, Swamp 81 why you tease us so long with your releases? Loefah’s classy vinyl imprint FINALLY got round to releasing Swims the ubiquitous Joy Orbison and Boddika collaboration several hundred months after it first surfaced via the usual medium (Rinse FM) and burnt a collective hole in our retinas after much repeat play via the subsequent YouTube rips. Now we can free up some time to speculate on the remaining glut of unreleased Boddika & Joy Orbison material that is out there!

Al Bleeky’s former Instra:mental cohort Jon Convex maintained his own fine form, with Bump N” Grind the first release on his eponymous Jon Convex Industries label featuring two examples of perfectly judged Electronic Party Music as he prefers to call it – which is better than post dubstep – on a smart little ten inch. Belgian imprint Silverback also made an impressive physical debut with their tenth release in little over a year that saw Polish producer The Phantom at the helm for four tracks that veered between sweat-filled house antics and what Teki Latex christened BokBokian Grime. The influence of current strains of bass heavy music can be traced as far as the northeastern Caribbean too as fledgling South London imprint cornered hotly tipped Puerto Rican producer Magnum for the equally good All Over Me EP.

Whilst we all wait to see exactly how Scuba’s Personality sounds, his label Hotflush continued their fine vein of twelve inch output with the debut release from newcomer Locked Groove which complemented the track that featured on Mr Rose’s DJ Kicks mix with two further jams demonstrating the Belgian producer’s talent for crafting impeccably produced, genre fusing music. Speaking of producers with an obvious pedigree and talent, Omar S kicked off a new year with Wayne County Hills Cops Pt 2 featuring everything you’d expect from a FXHE release. A hook-up with a mysterious producer?  Check! Amusing doctored image on the centre label? Check! Glistening synths, shuffling hats and rugged analogue bass lines? Naturally on another killer 12″ – business as usual, then.

Over at Juno Download, all eyes were on Amsterdam-based label Dekmantel, who continued their fifth anniversary series with a weighty three-track offering featuring a mix of hometown heroes and imported talent in the shape of Awanto3, Makam and Lone. Keep an eye out for the other instalments in the five-part series, with Hunee, San Proper and Skudge all still to come.

Elsewhere, the venerable JD Twitch’s second round of cumbia edits for KZA’s Let’s Get Lost imprint arrived; there’s a dearth of information regarding the source material here, though the second track is a particular highlight, all rattling techno rhythms upon which Twitch works through a number of different Cumbia tracks within the space of several minutes. Oh, and that ace remix package of “Go Bananas” by Superlife also arrived into the world of binary code and mp3 via People’s Potential Unlimited, with Legowelt, Max D, Peanut Butter Wolf and Steve Summers all reinterpreting a proto techno classic. The aforementioned Helium Robots missive on Running Back avec Theo Parrish remixes also arrived in the digital domain, as did The Terje’s all conquering It’s The Arps EP and the Bjorn Torske remix EP on Smalltown Supersound.

CD-wise it was all about Pinch’s entry into the Fabriclive canon, with Fabriclive 61 seeing the Tectonic boss at his most versatile, mixing up a range of bass music flavours ranging from atmospheric dubstep slow burners and dreamy soundscapes to acid-tinged 4/4 bangers, snappy garage, and even a dash of bombastic footwork.