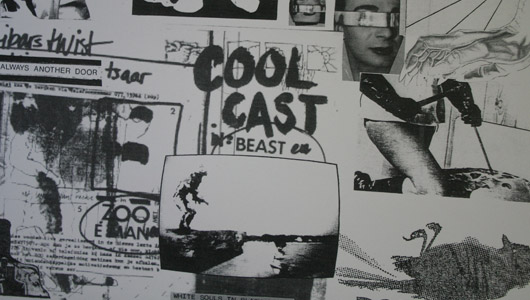 Arriving back in the Juno Plus office at the start of a New Year sporting a collective fuzzy head, we’ve been grateful the traditional slow drip of releases from record labels has been mercifully adhered to once more. There still was some room for some gems to appear however.

Top of the list undoubtedly was the debut release from Mutant Beat Dance on the ever excellent Rong Music imprint. Just one of many musical projects from Ann Arbor fixture Melvin Oliphant III, the Mutant Beat Dance initiative sees him team up with vintage synthesizer enthusiast Beau Wanzer for two variations on what Mr Traxx has christened Jakbeat. the spontaneous energies and innovative rhythms that flush through “Another World” and “New News Is Old News” ensure this twelve inch is our record of the week. As you can see above it also comes replete with some stunningly good cover art – more of this please Rong!

Not far behind in the making us thankful we were at work stakes was a double drop of goodness from the Dekmantel stable. This year sees the Amsterdam based label and party collective celebrate five years in business and they are releasing a series of highly collectable Anniversary Series twelve inches from artists who have helped establish the brand. The inaugural release sees Juju & Jordash share space with Morphosis on a twelve inch that sets the bar for what will follow – as the former honourary Amsterdammers line the A Side with a sumptuous Cosmic Dub of their Aesthetic Audio drop “African Flower”. Complementing this, Morphosis delivers a jitteringly brilliant exercise in rippling and dusty beatdown on “Impulse” which features some skin crawling organs straight out of Hammer Horror.

In addition Dekmantel also introduced the record buying public to the mysterious but clearly quite talented Vedomir with two tracks of differing approach but equal aplomb. Sounding very much like a techno wizard from a Tolkien novel, Vedomir graces the untitled A Side with some constantly fluctuating analogue rhythms and deft percussive touches, though our favourite is the richly rewarding flip “Orthodox Ambient” which sees fluttering female vocal harmonies dance flirtatiously with a warm arpeggio atop a subtle backdrop of pads.

Representing the grizzly end of the electronic music spectrum was  the perpetually under rated French producer I: Cube who slipped out the Lucifer En Discotheque 12″. A tantalizing three track insight into what Megamix, his forthcoming and long overdue fourth album for Versatile will sound like, the A-Side looms large. “Transpiration” is a gloriously sweat filled paean to various stages in dance music history, seamlessly combining 90s era rave stabs with the percussive swagger of punk funk and I:Cube’s own leftfield inclinations. However, those who enjoy a driving synth wave oddity will find the title track a certified delight.

In the land of binary code and mp3s the choicest pickings were perhaps in the space marked TECHNO as Portuguese duo Photonz served notice of what should be a fruitful year with the quite excellent WEO/Chunk Hiss. Theirdebut release for the Príncipe label, both tracks are posited as contemporary take on their pre-teen infatuation with rave music. Something immediately apparent in the opening bars of “WEO”, a certified 11-minute techno beast. “Chunk Hiss”, meanwhile could easily be mistaken for a Legowelt production in the early moments before launching into 808 State style rhythmic insanity. Highly recommended!

Matching this was Field 06, a four track drop from Dutch label Field that gathered up productions from the likes of Delta Funktionen, Mark Du Mosch Roberto Auser and Rod that demonstrated there was much to explore in techno beyond Berghain style repetition. Delta Funktionen opts for the visceral approach with the tough and jacking “Work” which is matched by Rod’s contribution, whilst Du Mosch throws a mid point curveball on “L’Argeant” with a deviation into Italo flamboyancy. Roberto Auser ensures the diversity is maintained with the epic beatless “Fatal Attraction”.

On the CD front, a selection of typically off kilter jungle cuts recorded by Luke Vibert under his rarely used Plug alias in the 90s and released on the esteemed Ninja Tune label was the only real shiny disc of note this week, though fret not as 2012 promises much when it comes to albums.