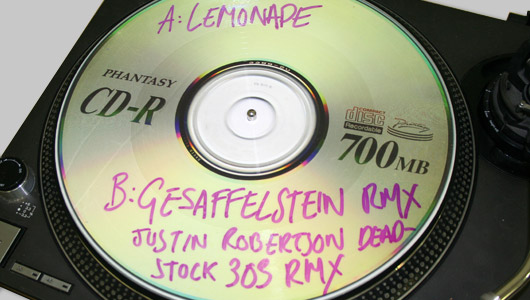 The twelve inch picture disc is regarded as gimmicky at the best of times, but even the most hardened cynic (and there are a few here) couldn’t help but be impressed by the sheer awesomeness of Phantasy Sounds’ CDr/12″ hybrid for the remixes of Alkan & Ridha’s Lemonade, as pictured above.

Elsewhere, and one of our favourite labels in L.I.E.S. returned with the debut sounds of a producer we are likely to hear much more of as 2012 creeps towards it’s 366th day. A descendant from a Bengali aerospace engineer and Cherokee psychic, Xosar is a talent to look out for on the basis of the three tracks that make up her debut EP, the quite excellent Tropical Cruize. And there’s a Marcus Mixx video too, that’s always a good look.

If you vibe off L.I.E.S. then you will no doubt want to check Dekmantel’s ongoing 5th Anniversary 12″ series, with the second edition proffering some excellent productions from Awanto 3 (on a dusty Mark E tip), Makam and Lone in trademark form across the lemon yellow 12″. Further drops from Kirk DG on RH, some more FCL gold on We Play House and an intriguing EP from the Derive label ensured there was plenty in house music to keep you occupied this week

Over in the techno corner, Ostgut Ton’s increasingly lank haired icon Dettmann graced the Music Man imprint with an all new production to complement the Conducted mix CD he released via the Belgian label late last year. Landscape sees Dettmann take influence from the mutations the Berlin techno scene is currently enjoying, weilding a groove that’s 100 per cent garage but surrounded by the hiss and echo of Basic Channel’s audio debris. Do check the flipside remix from the mysterious Answer Code Request that makes the track markedly tougher and proves a timely reminder of how good his debut EP was.

Also worthy of investigation was the new Mowar twelve from the hitherto unknown Searle which occupies the darker, claustrophobic end of the techno spectrum and comes with an excellent Claro Intelecto remix which ploughs a similarly metallic path to the themes that permeate his new release on Delsin. The arrival of a new Basic Soul Unit twelve inch is always good news, and Northern Heights – the Toronto based producer’s debut on Other Heights – gets bonus points at Juno Plus HQ for including a pair of remixes from former podcaster Unbroken Dub.

Occupying a head space all of their own were Organs Of Love, debuting on the esteemed Optimo Music with an EP in Bone that they describe themselves as occult insomnia sex music. Whilst regular followers of JD Twitch’s label will need little additional encouragement to indulge, those put off by such a description (and the track titles)  should swallow their fear as the Organs Of Love delve in an undeniably impressive sound formed of delay laden organs, clicking drums, droning guitars and pained vocals.

Over at Casa De Juno Download, Fine Art offered a neat digital appendum to New Zealand based radio type Frank Booker’s recent 10″, with the sumptuous single track Shapes & Patterns release. The aforementioned Organs Of Love EP on Optimo also hit the digital shelves, as did the excellent Locked Groove debut on Scuba’s Hotflush and Pinch’s entry into the Fabriclive mix hall of fame.

Elsewhere, were pleased to see Versatile and Chateau Flight don I:Cube return with the Lucifer En Discotheque EP: the title track’s pleasing Italo lean was curiously at odds with the demonic moniker, but we’re not complaining. Equally worthy of your attention is “Transpiration”, which sees sizzling hats and a solid disco beat set the tone, while the meat of the track comes in the form of a nasty old-skool rave stab.

For those who like their WAVs rough and ready, Radio 1 Xtra jock and veteran garage and bassline producer DJ Q arrived on London imprint Unknown To The Unknown. Title track “All Junglist” is initially characterized by drum programming that is, well, junglist, but then the track is interjected with a beat that is less broken, and split in half, ripped apart with a tidal wave of woozy bassline action; combined with the tropical synth melody and hardcore referencing piano you’ve got a track that is classicist and very much in keeping with the label’s technicolour focus.

On the CD racks, the arrival of Gonjasufi’s latest album on Warp Records was filed under “pleasant end-of-week surprise”, with the producer combining trademark raw drums, washed out melodies and milieu of sampled vocal elements with his inimitable style.