Objekt next up on Hessle Audio 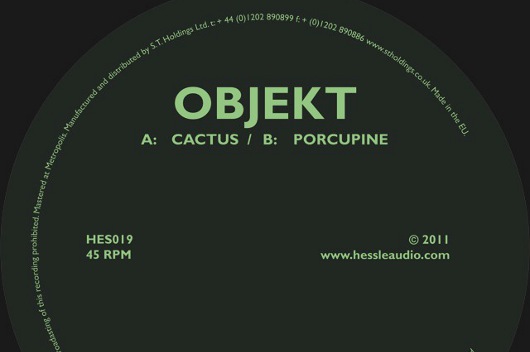 Hessle Audio have announced that highly touted producer Objekt (aka TJ Hertz) will provide the label’s next release.

The Berlin-based artist won plaudits from critics last year for his productions which expertly combined elements of dubstep and techno, with an understanding of production that came so fully formed, it led many to assume that Objekt was merely a pseudonym for another, more experienced, producer. This skill comes partly from Hertz’s day job, as a programmer for softsynth manufacturers Native Instruments.

Lead track “Cactus” will be familiar to those who checked Ben UFO’s Rinse 16, a standout moment on the mix thanks to the pulsating bass drop which had many guessing how and when Hertz would choose to release it. It’s complemented by the more rhythm focused “Porcupine” whose rattling nature recalls the excellent SBJKT remix project between Hertz and perma mask wearer SBTRKT.

It marks the first release from Hessle Audio since their 116 & Rising compilation was released last year, and it’s the first dedicated artist release since Peverelist’s Dance Til The Police Come was unleashed last May. Hessle, whose brains trust includes the aforementioned Ben UFO alongside Pearson Sound and Pangaea, have been hard at work touring throughout 2011; whether this release marks the start of  more regular output from the label remains to be seen.

Cactus/Porcupine will be released through Hessle Audio on 12″ vinyl and digital formats on February 6, 2012.