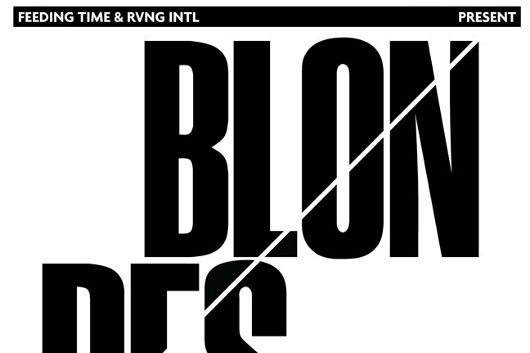 The chance for Londoners to bask in the electronic glory of a live performance from Brooklyn duo Blondes is afforded next month, as they land in Dalston as part of their European tour to celebrate the launch of their debut self titled set.

The Brooklyn duo of Sam Haar and Zach Steinman are no strangers to the pages of Juno Plus and their debut album – due for release via RVNG Intl on February 7 – is an undoubted highlight of this quarter, collecting all the tracks from last year’s series of conceptual twelve inches on a double CD that features some truly outstanding remixes (you can read more info on the album here).

Given the hypnotic nature of Blondes’ music, the chance to see them perform live in what is one of London’s more intimate environments in the Shacklewell Arms is an enticing one. Feeding Time have chosen some intriguing support for the night in the shape of Eaux, a new electronic project formed by members of the Sian Alice Group, whilst the excellent Rory Phillips (who has just started his own Mixed Fortunes singles club) has been called upon to fill in the gaps with a DJ set.

Feeding Time presents Blondes live will take place at the Shacklewell Arms on Thursday, February 16 with tickets available now via the following link.

Those not in London can catch Blondes on the following European dates throughout February.