Having come to the fore with his Beach Boys meets Dilla self released album Pet Sounds: In The Key Of Dee back in 2008, Bullion has released a series of well received EPs in the subsequent period for the stellar One Handed imprint as well as gracing the Young Turks label with the excellent and quite sexy looking You Drive Me To Plastic album last year.

Bullion is of course no stranger to R&S Records, delivering a typically psychedelic remix of Model 500’s “OFI” which was released early last year and included on the label’s In Order To Dance XI compilation alongside a new original production in the shape of “Ralph”. That latter track introduced our ears and yours to Bullion’s talent for singing, something that is further demonstrated on both the tracks that feature on Say Arr Ee.

This is the first release from R&S Records in what promises to be an interesting year, with the label having sneaked out news that US duo Teengirl Fantasy and sometime James Blake collaborator Airhead have also been signed up for as yet unannounced releases as well as the promised and likely-to-be-epic Space Opera style debut album from Space Dimension Controller. 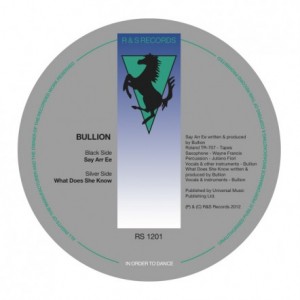 A. Say Arr Ee
B. What Does She Know