Secret Circuit next up on Beats In Space 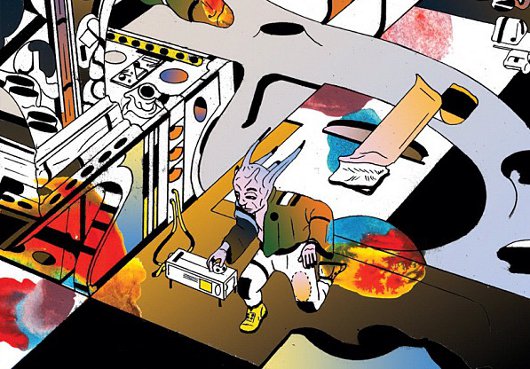 Tim Sweeney’s fledgling Beats In Space imprint has unveiled its second release, with a two track 12″ from Secret Circuit aka Eddie Ruscha due out next month.

The release follows the recent debut 12″ from French duo Paradis on the label named after Sweeney’s long running and highly successful New York based radio show. Ruscha, son of the famous American artist Edward Ruscha, is a well regarded experimental musician and is one half of the Laughing Light of Plenty alongside Rub N Tug’s Thomas Bullock.

The intriguingly titled A-Side “Nebula Sphynx” is a throbbing Italo-leaning house workout in the vein of Chicken Lips, while “Parascopic Rope” is better still, with hefty bass squelches offset by all manner of quirky percussive touches and synth flourishes.

As with the label’s debut release, the cover artwork is captivating, with design duties undertaken by CF (aka – Providence-based artist Christopher Forgues). The Will Work For Good agency is once again responsible for the packaging, which features a removable vinyl BIS logo cling.

Beats In Space will release “Nebula Sphynx/Parascopic Rope” in February 2012.