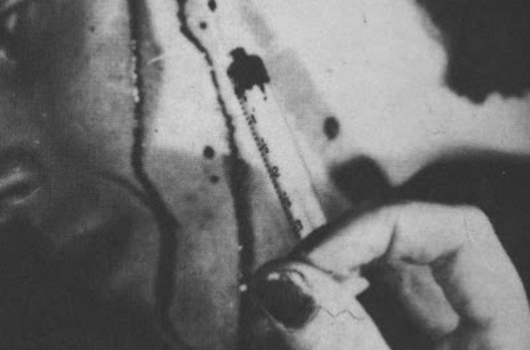 Celebrated London label Blackest Ever Black will usher in what promises to be a fruitful year with the release of Now I’m Just A Number: Soundtracks 1994-95, a selection of reissued and remastered tracks from revered New York post punk industrialists Black Rain.

The seven tracks that make up Now I’m Just A Number: Soundtracks 1994-95 originally appeared on the Black Rain album 1.0 Argabright recorded with cohort Shinichi Shimokawa at Current Sounds and Shimokawa Studio and is so called as it features music the duo composed for the timeless Keanu Reeves vehicle Johnny Mnemonic as well as an audio book of William Gibson’s cyberpunk novel Neuromancer.

Dabbling in a desolate sound wholly at home on Blackest Ever Black, the Black Rain release is just one of many interesting projects that the label will be releasing this year with new material from the likes of Raime, Young Hunting, Vatican Shadow, Regis and Tropic Of Cancer also promised. The latter two should go some way to appeasing fans of the now defunct Sandwell District imprint.