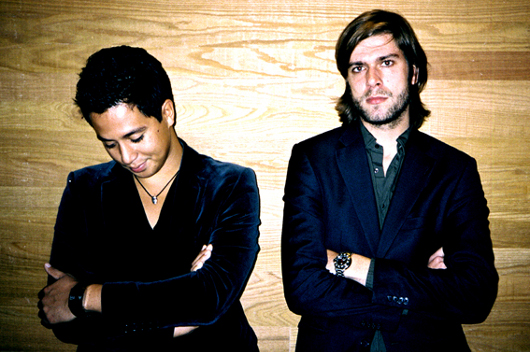 When The Please‘s rather uniquely titled ‘s-Gravendijkwal EP landed in our inbox a few months ago, we knew that we were about to be exposed to something rather special.

With track titles like “Abodigital Dishwasher” whose murky, threatening bass crawls along at a sinister 105BPM, “Laserguided Weapon” whose shimmering textures and bright keys create a unique form of cut up lounge music, and “Sampler Crack”, which utilises a gloopy bassline and ethereal tones to create a skewed vision of techno, the music turned out to be just as interesting as the oddball titles suggested,  and it turned out to be one of this year’s most singularly original releases. It encouraged us to find out a bit more about the pair, otherwise known as Hans Verhaag & Minggus Dorpmans, and we managed to get a few minutes out of them to tell us a bit more about their music, as well as coaxing an exclusive mix out of them for your listening pleasure.

First of all, where in Holland are you from? Tell us about your upbringing there.

Although Minggus was born in Amsterdam, we were both brought up in the northern part of Limburg. This is supposed to be the slower, somewhat picturesque and laissez-faire part of the Netherlands. Being brought up in and around the town of Venlo, feels like a big advantage both geographically and culturally, since this region offers its inhabitants quite a balance between a modern urban life, and a more calm and somewhat old-fashioned kind of living.

How did the two of you meet, and what made you decide to produce together?

In a nutshell, we met in high school, became friends, found out the like-mindedness musically and eventually started to make music together.

How long have you both been producing together as The Please? It seems like you’ve come out of nowhere with quite a fully formed and unique sound…

We’ve been producing together for about five years now. Since we intend to make music that reflects our similar but also our individual influences and preferences, we have been practicing way longer than that.

What kind of equipment are you using to make your music? Analogue gear, digital gear, or both?

We try to spend as little money as possible on gear so our stuff is mostly created on a computer, especially since software developers have managed to create tools that make it possible to equal those acclaimed characteristics of so many famous synths, samplers and sequencers both analogue and digital. For us, working with the old equipment of fame is somewhat like a dream. It would however, cost a lot more money, effort and time while for us creating something is supposed to be about the product, not the process. Actually, what it all comes down to is that, for now, we seriously lack money!

Your sound takes in a lot of influences – lo-fi hip-hop, house, lounge, disco – which producers have influenced your style the most?

That’s quite hard to say as there have been so many. Many producers or composers that combined different genres, influences and other stuff have been influencing The Please’s sound. Whether that’s current guys like Madlib, Caribou or Flying Lotus, or maestros from a long gone era like Barry White and so many others, it’s probably their versatility that made them influential. Furthermore, we like to make music that is about love and romance or at least something in the context of caring for each other. The sensuality and sexuality in a lot of old-school soul and especially funk was probably what triggered our romantic side. Also, brought up during the eighties and nineties in the Netherlands, it was almost impossible not to come into contact with the more electronic stuff. To be quite honest, the gabber and hardcore that got big here during the nineties (when we were in our teens) have been a big inspiration as well!

And how would you describe your music? House would seem to be the easiest label to put on it but it’s obviously much more complex than that…

We don’t try to label it, labeling to us somehow isn’t that logical or musical. That said the label “house” doesn’t feel all that uncomfortable, especially when tempos are being kept out of regard. A lot of people, especially DJs, label music concerning a track’s tempo, alongside or sometimes even rather than other musical aspects. The sound we want to create however could either be slow or fast but to us it’s still a descendant of old-fashioned house music, but most importantly, people who listen to our music should feel free to label it however they want as long as they keep listening to it. The EP you’ve just released is incredibly varied in its sound – was the outcome simply the result of experimentation, or did you start out aiming to create a particular sound?

It’s more about trying things out and see what works. We try to make music that, as much as possible, creates itself. We, however, always attempt to put some awkward warmth in our tracks as an expression of love or romanticism.

The EP uses some quite unusual tempos quite extensively, which is at odds with a lot of the Dutch house doing the rounds at the moment. What do you find so appealing about more unusual tempos? Do you find it allows more room for experimentation?

Well, for us the tempos aren’t all that unusual, they feel quite natural to us actually. We do feel that slower tempos do actually offer more “space” for whatever you want to put in there.

Your debut EP is also the first release on the rather mysterious Purple Maze imprint – a cursory look around the corners of the internet suggests a connection to Delsin, which is more known for its techno focus. This EP is rather more eclectic in its influences – can you tell us anything more about Purple Maze and how you came to be involved with them?

The kingpins behind Purple Maze are probably not cheerfully awaiting all that noise about the who’s who, so we’ll keep our lips sealed. Let’s say that we met and befriended someone, who’s also from the clever Limburg-area of the country and turned out te be a big supporter of our music. That put aside Purple Maze’s  second release by Yør, shows it to be madly diverse.

You’re both from Holland, which seems to be the world’s centre for a lot of the most exciting things happening in house music right now – what’s your relationship with the club scene over there? What kind of club nights are you going to?

Given the fact that, whenever we go out clubbing, one half of The Please can’t seem to keep from getting incredibly hammered, it is almost impossible to visit club nights in any kind of regular fashion. Our relationship with the club scene has however definitely deepened since we came acquainted with the night train running between Amsterdam and Rotterdam.

The cross-fertilization between house music and other genres seems to be one of the most exciting areas in dance music at the moment. Are there any contemporary producers doing similar things to you (or just interesting things) that you particularly admire? Any labels doing stuff you are particular fans of?

Most artists we admire are way better than us so we think “similar” would be a totally misplaced expression. Especially guys like Samiyam, Blawan, Floating Points or even Tyler the Creator come up with stuff that’s incredibly original and creative, so that’s a great inspiration.

What’s next for The Please?

I think at a point we’ll start lobbying for the colonization of Venus. Hopefully we’ll succeed and build high fashion recreational bungalows there, for all of us to enjoy. But for now we’re heading for Maze 003, and see where that takes us..

And given the interesting sounds you’ve already created, where do you see your sound going from here?

Hopefully into your ears, and those of many more!

The Please Juno Plus Feature podcast