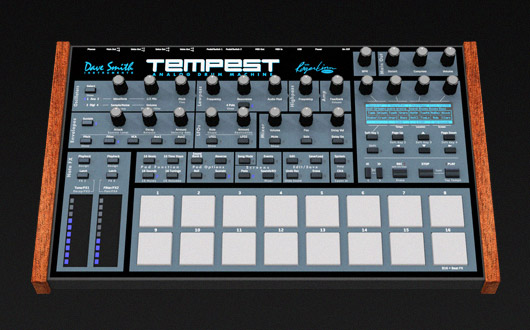 The “Father Of MIDI” Dave Smith has been making synths since the 70s. He founded his own company, Sequential Circuits, and created the world’s first microprocessor-based musical instrument, the first programmable polyphonic synth in the form of the Prophet 5 and wrote the low-level optimized floating point synthesis code.

Likewise, Roger Linn needs little introduction, with his gift of the LM-1 Drum Computer, the first programmable, sampled-sound drum machine in 1979. Fast forward to 2011 and these two members of the elite “Dead Presidents Society”, an organization comprising the key members of the synthesizer community, have got together to create what has been billed as one of the most innovative musical instruments of this century. On the bench it measures up at a highly portable 15.4″ wide by 9″ deep by 2.5″ high, which means you can sling it into standard DJ luggage but at the same time its near 3kg weight makes you feel like you’ve earned every inch of it. Like the Akai MPC 60, the Tempest also bears the signature of Roger Linn. At first glance you could be forgiven for thinking this looks like another stage in the evolution of the Linndrum, so here at Juno Plus we’ve decided to take a proper look.

The user interface won’t throw any drum machine enthusiast in terms of layout. In total there are 90 panel controls which consist of knobs, multi function buttons (there is a shift key located on either side of the module so your hands won’t get tangled up) and those all important 16 pressure sensitive (2×8 configuration) pads, plus a pair of 6.5 cm real time effects ribbons. From left to right, there’s the oscillator section which includes four oscillators for each of its six voices. The first two have an analogue signal path but are governed by the ever more acceptable DCOs, whereas oscillators 3 and 4 are digital but the signal is then sent to the analogue VCAs and filters so the sound remains warm and punchy. On the subject of the digital oscillators, the Tempest contains around 400 samples (designed by FXpansion and Goldbaby) in 16-bit, 44.1kHz mono format which includes some highly usable kits, plus the single cycle waves from the Prophet VS.

Back to the analogue side of things, and OSC Off, Sawtooth, Triangle, Saw-Tri, Pulse 0% – Pulse 99% selects the oscillator wave shape and you can mix both or sync them together for hard sync. The oscillator pitch can be set over a 10 octave range, from 8Hz to 8kHz in semitones. Some of digital samples are fixed in pitch so you can’t tune/transpose them, although we only encountered this on the noise types. The glide mode was particularly impressive as you can turn it on and off simply by playing staccato or legato; a very useful performance tool. The filters are simple and effective with the much loved Curtis type lowpass operating in four or two pole mode for a -24 or -12dB slope. The resonance is pretty serious in four pole mode, with self oscillation biting at your heels – in two pole mode it’s a great deal more subtle. The audio mod knob controls how much of oscillator one’s signal is used to modulate the filter cutoff frequency. The highpass is set at two pole with frequency modulation. The last knob on this top row is Amp feedback, which makes a feedback loop from the left output of your desired voice – the knob represents its volume and you can put small precise licks here and there or jack the whole thing (and audio mod) round for speaker blowing mayhem.

The envelopes don’t look dissimilar to those of a standard synth, with five envelope generators (pitch, lowpass, amp, aux1, aux2) with the addition of AD mode, which, as the name would suggest, effects the attack and delay only on each. This eliminates the need to set release and sustain, which aren’t always needed when working on percussive sounds. Use the velocity amount to set up velocity sensitive sounds and get an envelope to modulate itself by means of one of the Tempests Mod paths. Moving on, the Tempest has two LFOs which you can set in triangle, reverse sawtooth, sawtooth, square and random shapes, all of which can be synced to the beat or otherwise. The mixer (32 input) completes this second row of knobs which is used in conjunction with the various mixer screens controlling volume, mute, solo, pan, delay send and effects settings for your sounds. Directly below you’ll find two rows of keys that govern system functions including pad function, pad options, screens, record/edit.

The bottom left section of the unit houses the real time effects section of the instrument; here you can effect either the whole pattern in Beat FX mode or isolate individual notes, adding licks here and there with the two touch sliders. The top right of the unit houses the graphic OLED screen with navigation keys and transport functions, with a further row of knobs for BPM/swing adjust, distortion, compression and volume over the master output.  Turn the Tempest around and the back panel is equally stacked, featuring a 2 x ¼” TRS for the main out, then another three sets of stereo pairs over TRS for voice out 1-6. There are two ports for expression pedal or footswitch, then there are five Pin Din MIDI ports for MIDI in/out. This would have been a classic opportunity for Dave to grace us with his all too rare Poly Chain Out fourth MIDI socket as there is space, although it would probably be more of a bespoke feature rather than everyday functionality. There’s a USB B type socket which can be used for importing data from SysEx files. Power is distributed via 1.5 VDC 1.1A and you’ve got an independent TRS headphone jack.

Anyone familiar with analogue circuitry will respect the fact that the components require a few minutes to reach optimum running temperature, and once executed you’re free to get stuck in. The way in which you organize your workflow is within “Beats”, which represents all the components that make up your drum pattern. Inside these sequence hits you’re free to edit individual notes (such as snares and kicks), all of which can be saved with custom data entry within your projects, to be recalled when necessary. Aside from all the physical controls, the Tempest contains many more screens in which you can get in as deep as you need with the parameters in order to shape your sound. The screens you’ll be using consist of “Pads”, which displays the way in which your various sounds are mapped to the drum pads, and “Sounds” for selecting your samples from the banks, shaping your waves with graphical displays wherever possible. “Event” is for more programming of the patterns and you can hit playlist to sequence your “Beats” together.

Setting up the pads is the next thing on the ‘to do’ list, and this is done by means of the pad function module which gives you the option of “16 Beats”, a set of 16 factory presets ranging from breaks to techno via a nice little rendition of the Human League’s “Don’t You Want Me”. For anyone new to the world of step sequencing, an easy way to get started is to select one of these beats and just change the sounds accordingly or edit/erase the original pattern. Hit “16 Sounds” and the sixteen pads are used to play the sounds (from either Bank A or B) of the selected Beat. “16 Time Steps” is for selecting the Roland based input/playback method, with pads lighting up as the sequencer rolls in familiar style (the sequencer resolution is 96 parts per quarter note, however there is a forthcoming time-shift update). “16 Tunings” enables you to select one sound and map it over the pads with your selected method of tuning, whilst “16 Levels” allows you to have sounds of different volume levels assigned to the pads. Finally, you can use “16 Mutes” to make the pads act as sixteen mute switches for playback of your selected sound palette. There’s a roll button, which will either make the Tempest stutter on a segment of your beat (which can be user defined on screen) or let you create notes at whichever quantize rate you’re working on with varying pad pressure effects the velocity level when in either “16 Sounds”, “16” Tunings or “16 Volumes” mode. There is also a reverse function, but at the time of review this wasn’t fully operational and we’re assured that regular firmware updates will soon be available.

Once you’re up to speed toggling between these modes and screens, you’ll find the creative process gets stronger the more you familiarize yourself – think of it like changing gears in a car; a skill that largely stays with you for life. It won’t be long before the temptation to use the effects kicks in – here you can use small or sweeping movements to the pressure/position-sensitive strips to add or record filter frequency, tuning, envelope decay, and pan changes latching each strip to the relevant FX. Now, it would be easy to write a further 1000 words covering the modulation sources and destinations, but we’ll finish by summarising a couple more useful attributes. Firstly, you can set the swing (which is based on the legendary RL swing as previously seen on MPCs) in real time between 50-75%, thus giving a more human, loose and natural sense of rhythm which is then saved to memory.

As with many of Dave Smith’s creations, if you experience any loss in tuning you can recalibrate the analogue oscillators and filters. As you’d expect from an instrument that even gives its digital alter-ego an analogue lick, the sound is extremely warm and powerful, with more personality than the other market alternatives.  If you want something a little cheaper that will still make your tracks pump, by all means take a look at Elektron’s Machinedrum (which has several synthesis methods). If you’re looking for a long-term investment that will yield its secrets and true power after repeated practice, then look no further than the Tempest: a future classic. [Find out more at Juno]