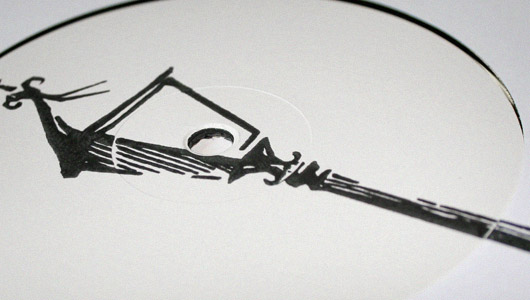 Whilst all may seem calm on the Juno Plus website, behind the scenes chairs have been thrown and harsh words exchanged as the annual end of year list decision making dragged into the midnight hours. To make such matters even more complicated,  record labels seem intent on releasing excellent new music as the year’s end draws ever closer.

For example, the debut release from Blawan and Pariah’s new label endeavour Works The Long Nights arrived sporting the above smartly stamped sleeve art and three tracks that constitute the first serious glimpse in the R&S 2.0 duo’s work under the Karenn moniker. The title track “Chaste Down” is reminiscent of the kind of metallic tech funk we’ve come to love from the Fachwerk crew and leaves us pondering just how far down the rabbit hole this label might go in 2012.

No less impressive was Dave Huisman’s overdue return to his A Made Up Sound moniker with the suitably titled Take The Plunge, which is perhaps the most mind bendingly original example of his unique approach to electronic music yet. Yes, his garage-inflected techno rhythms are present and correct on the title track, but Huismans surrounds them with a wall of syncopated samples that are chopped and distorted beyond all recognition, whilst their pneumatic drill-like quality pans across both channels at irregular intervals.

The ever excellent Blondes unveiled the final chapter in their trilogy of twelves for the ever excellent RVNG, further revealing their alchemist style talent for crafting intoxicating dancefloor material themed around concepts of duality with the quite stunning Wine/Water. It’s proved quite hard to decipher which side is the greater production with “Wine” proving hypnotic from the very start whilst the subaqueous qualities of its flipside counterpart creep up on you. It is however a worthy end to what has been a very impressive series from the New York duo.

Perseus Traxx not only contributed a quite brilliant live set recording to our growing podcast series this week, he also returned to the Bunker imprint in fine style with six tracks filled with a richness in sound and attention to detail that only someone with a room full of vintage analogue gear and wires could achieve. A similarly rough approach to making music was naturally apparent on the new release from John Heckle, gracing the always innovative Signals imprint with ten inches of pounding drum workouts that feel spontaneous in arrangement and devastating in execution.

Detroit had plenty to say this week with Carl Craig’s Planet E imprint unveiling some limited edition Daphni remixes of his own No Boundaries endeavours, whilst Omar S tapped up Luke Hess for a final selection of Dubout cuts on his FXHE label (be sure to check the runout groove on this one). Jeff Mills continued to look towards the Orion constellation for inspiration on his latest release, the six track of stripped down sci fi futurism that was Star Chronicles: Orion and there’s a limited edition version replete with 82 page booklet available for the hardcore Mills fans. Finally intrigue abounded on the debut release from A Drummer From Detroit whose two jazz indebted productions for the Fit Sounds imprint were naturally heavy on the dextrous usage of rhythms.

On the digital front, it was hard to look past the excellent remixes of SoYo techno stalwarts The Black Dog, with Shifted, Blawan, Sandwell District, Cabaret Voltaire’s Richard H Kirk and Perc among those contributing. Meanwhile the mighty and ever-talented Terror Danjah stepped up with a two-track release on Hyperdub, WNCL brought back 90s UK house duo Ultramarine for some acid by name, acid by nature business, while Dauwd, who caused a bit of a stir earlier this year with a free digital EP released through Pictures Music, finally got his first release proper with What’s There.

Other EPs of note to hit Juno Download came from Untold (on Clone’s Basement Series), Guy Andrews (on Hemlock), Tyson Ballard (for Voyeurhythm), Kowton (on Teal Recordings), Floating Points (Eglo) and Sepalcure’s album for Hotflush. Elsewhere, Kate Wax joined James Holden’s Border Community and proved to be a perfect fit with the hypnotic Dust Collision album. Wax’s is a dark, haunted take on pop music, with the kind of minor-key tones and drones that pervade her new home across its considerable legacy. While there’s been a penchant for fuzzy production values in this kind of music this year, Wax instead has a refreshing airiness to her tracks without holding back on the elements.

CD of the week award goes to Onra, with the Parisian beatsmith returning to China and Vietnam’s dustiest record stores to mine a milieu of samples for the excellent Chinoiseries Pt.2. With 32 tracks (or sketches) in total, there’s much to explore, but the raw drum workout on “Mai’s Theme 2” and ridiculously addictive loop-driven jam “Stay With Me” linger long in the memory.