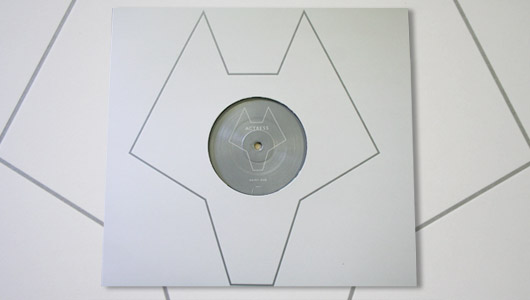 While we could bask in the plaudits for a good job all round on the free Christmas seven inch we curated for the customers at Juno Records, laurel resting is just not our style. Monday will see the onset of a week’s worth of 2011 round-ups, lists and galleries which is no easy task when you consider the Juno Plus editorial team also has the hard job of listening to new records every working day.

Some late contenders for the aforementioned lists arrived, not least the welcome return of Actress whose Rainy Dub seems to signify a concentrated shift in the producer’s focus towards ever new jagged dissections through the fuzziest extremes of sub bass, claustrophobic rhythms and creeping corroded textures. The accompanying minimal cover art from Mr Trilogy Tapes as pictured above earmarked the record as our favourite of the week.

There was however strong competition in the shape of the excellent reissue of rare and early Karl O’Connor material on Downwards. Entitled White Savage Dance, the impeccably presented twelve inch gathered up tracks that surfaced in limited quantities on 7″ in the early days of Downwards but were actually recorded over a period that began in the mid 80s with corrugated racket of “Here & Now” (English Version) a particular highlight. Regis completists will find much of interest in the accompanying A5 booklet which features extensive sleeve notes from Downwards alumni Tony Burnham aka Autonym.

The enduring popularity of Four Tet’s entrance into the Fabric mix canon seemingly convinced the elusive producer behind one of the stand out tracks on the mix to finally release it proper, as Persian dropped “Feel Da Vibe” on his/her/their own newly minted Persian Dubplates label. There was also room on the twelve inch for Perisan to squeeze in some deft raggadisco and dusted boogie sung by a slightly drunk and seedy uncle.

If your ears require something of a more uncompromising nature, then Sandwell District delivered perhaps their most finely chiseled effort to date in the shape of Rrose’s Merchant Of Salt. Filled with laser guided menace, we recommend you approach both tracks with caution, especially the B Side plunge into the foggy recesses of mordant rhythms and visceral, gut wrenching sound sculpture that is “Waterfall”.  Equally excellent in execution was the Numbers debut of Norf Londonder Rohan Randomer, whose deft talent for drum programming might get a certain Blawan worried about his unofficial title of Mr Drums. It’s hard to pick a favourite between “Real Talk” and “Stalker” but together they both make for perhaps our favourite release on Numbers to date!

Ace German imprint Fachwerk signed off 2011 in the finest style possible, dropping a clear red vinyl twelve inch that brandished some excellent productions from label bosses Dehnert, Rydell and Lindau. Do check the Lindau and Dehnert collaboration “Sophia”, with with the dense swamp of bass and singular drum kicks in the opening bars not really giving prior warning to the thrilling rhythmic mess of saturated acid and panning vocals.

Over at Juno Download, Theo Parrish’s Sound Signature imprint was into welcomed into the digital domain – yes, you read that right! No sign of the deep house don’s hallowed back catalogue yet, but his latest, uncompromisingly titled single “STFU” stands up against his finest work; loose, hypnotic, scrambled and eerily distant, it sounds like twisted deep house jazz composed in another galaxy or even dimension.

Elsewhere, Marcel Dettmann arrived on Modeselektor’s 50 Weapons with his purest, most refined techno record yet. This is audible on both the functional yet subtle “Duel” and, to a greater extent, “Deluge”, which recalls Dan Bell in pared back 7th City mode. In the disco domain In Flagranti maintained their recent release-a-week policy by dropping the “Clustering Illusion” single on their own Codek imprint, while Zomby closed 2011 with Nothing, a companion piece to the incredible Dedication long player from earlier this year. Other must check digital releases came from the aforementioned Randomer (on Numbers), Smallpeople (on Smallville), Ricardo Miranda (on Stilove4music), Luke Abbott on Border Community and the magnificent Shadows EP by Floating Points on Eglo.