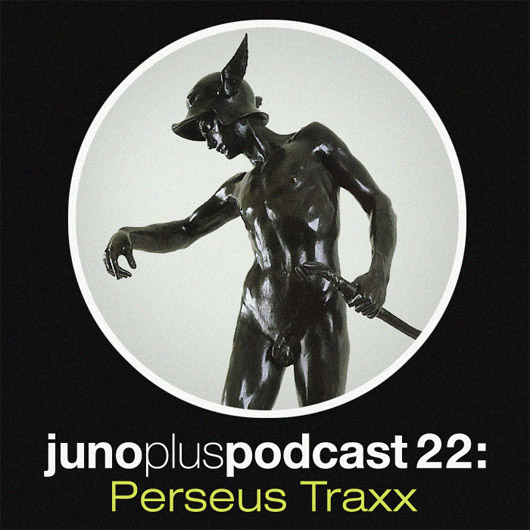 Something a bit special for this week’s podcast as we welcome the analogue rich sounds of Perseus Traxx into the fold for nearly an hour’s worth of original material recorded live.

Perseus Traxx has been responsible for one of this year’s most enduring releases at the Juno Plus office in Misspent Emotions, the heavyweight EP that dropped on Boe Recordings over the summer. At a time when a vast swathe of producers are referencing the nascent Chicago house sound with varying degrees of success, this was an EP that stood apart, not least for the saturated roughness to production that remains thrilling now.

Tracking the somewhat enigmatic producer down, a request for a mix was knocked back in favour of a prospect altogether more enticing, a recorded live performance of a “shit load of gear mangled together in a hap-hazard manner”. It arrives at a time when the Cambridgeshire-based producer has a number of releases either out or set to drop on a number of labels, with a return to the iconic Bunker imprint being followed by a release on the excellent M>O>S Deep label and much more.

The usual array of questions fired over to accompany the podcast elicited some amusing and enlightening responses from Perseus Traxx, which we deemed too good to chop and squeeze into the introductory editorial. You can scroll down to soak in Perseus Traxx discussing his many projects, mushroom picking and his future plans beneath the podcast, which was composed using the following list of equipment:

Juno Plus Podcast 22 – Perseus Traxx by Juno Plus on Mixcloud

No tracklist was provided.

Hi there, digging into your musical past it seems you might be York’s first and only proponent of emotive analogue sounds indebted to Chicago and Detroit. Can you give a more conclusive summation of your background?

Although some amazing electronic artists such as Beaumont Hannant, Tim Wright, and Martin Wheeler (Vector Lovers) have emerged from York, you are nearly correct in terms of the Chicago and Detroit part of the question. My friend Craig has been having his music released for some time under a raft of names (Mantra, Acid Phreeks, Myriadd) on a number of labels ranging from Djaxx to Bunker and more recently Crème Organization. He really knows his stuff and we have been doing some music together this year under the name Nite Vision, which goes deep down into an early Chicago sound. As far as we know, we are the only people in York releasing this sort of music, though technically I’m no longer from York. That is just a minor technicality though.

So are you still based in the picturesque city of York?

Unfortunately I’m not based in York at the moment for a number of reasons. For now my home is in Cambridgeshire, until I can find work back north and return to the walled city.

When did Perseus Traxx come into fruition?

In the last 12-18 months I suppose, though I’ve used the name for productions since 2005. I self released a track with a red wax stamp, and that went well, and then had the Bunker release. I saw that Steven who runs M>O>S had played my self released record so I got in touch with him. This past year that I’ve really hit my stride and focused on the music, and talked to other people who make music and release music. It’s been really good.

In terms of underground cache you’ve had releases on some pretty impressive labels, how did the relationship with Bunker come about?

I sent a demo to Guy at Bunker – pretty straight forward really. I told him Craig had suggested I get in touch, and that any feedback would be great. We emailed each other a bit, and I sent different bits of music. It’s all pretty lucky really, although when it comes to really stripped down raw music, there aren’t many people willing to take the chances that Guy does. He’s a maverick and I think he has real vision with the range of music he deals with. That vision is why Bunker has the reputation it has. 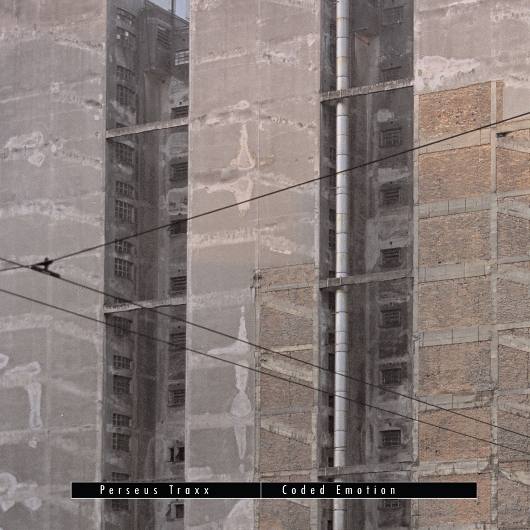 You’re in the midst of a number of releases dropping under a variety of aliases, could you explain the ideas and concepts behind them.

I guess the best bet is to approach this from a chronological angle. Robokid was a name I chose to DJ under and as I started to produce more music, the name remained, as there seemed little point in changing. The output covered Detroit style electro, house and techno, and I released on Archeology Records, Iwari, and more recently mp3s through Paul Blackford’s label Militant Science.

Perseus came about when I decided to strip back to something a bit more defined and stick with something more specific. There are a number of reasons for the alias, but a main one is that when you look at the guys who were making this music back in the day it seemed a lot of the hot names from Greek mythology were already taken: Virgo, Hercules, Gemini, Adonis, etc. ‘Trax’ are of course I was making, and this part was added more to define me as not being the other Perseus chap on Discogs, but it has stuck. The feel is very much early sounding house, due to the machines and techniques I use. I like the interface of a TR-707, I  like the sliders on a Juno 60, Acid sounds good, reverb sounds good, pretty straight forward.

I used to work with a friend of mine under a couple of names, Soulforce and Modern Gentlemen. Both had an Octave One type feel, hardware jams really. Bob would come round on a Friday night and we’d pour cheap wine from a plastic bottle into a decanter then make techno. More recently I’ve been working with Craig under the name Nite Vision. We both have similar tastes in music and what we came out with is the sort of music we like. I’m not too sure that we set out with the idea to do what we did, but because of the music we listen to and enjoy it seemed quite obvious that it would lean in that direction. Early Chicago House and its sound was pretty much defined by certain bits of cheap hardware and production methods. Rather than making over produced music with dozens and dozens of layers that gradually sap the soul and energy out of what you are making, or try to be really clever with tweaks; something simple, honest, and full of feeling can be done quite easily with a couple of synths, some drums and effects.

I have another alias I’m using for New York based label Sequencias, and that also has roots once again in Greek mythology. Orpheus was a poet and musician. To cut a long story short, he made very emotive music after losing the woman he loved. During my answering of these questions, I’ve been informed of another release that has literally just dropped. Some Dopplereffekt / Japanese Telecom style electro was released overnight, using the alias, John Titor.

And instead of doing a DJ mix for us, you’ve recorded a live set right? Is this indicative of what seeing Perseus Traxx on stage with a raft of synth gear at 3am in a basement is like?

I don’t have any turntables at the moment and because of where I live it’s not so easy to visit friends who have them, so it’s cheaper and easier for me to record a live jam. At the moment I’m getting things together for a live show at La Cheetah Club in Glasgow for The Guild of Calamitous Intent. I think its probably difficult to capture the feeling in a club, and this type of stripped down music works best in the environment you mention.

Anyway I’ve just recorded some of the bits I’ve been toying with in preparation for their night, a bit of a practice run I suppose, although I have quite a lot of bits and pieces lined up, but am still tweaking and getting things right, but that doesn’t mean I’ll be doing some sort of set piece. It could be that none of what is on this recording gets played; what you have is just me experimenting with some ideas. As far as a raft of gear goes, I like to think I’ve slimmed things down a bit, but the reality is that my kit is bulky so compromises sometimes need to be made. Sure, you can do more with a laptop, and they have their place, but that’s just not me really, it’s not how I choose to work.

All round Dutch hero Legowelt is known amongst other things for naming all his synths, is this something you do with your own analogue gear?

Erm, no. They are essentially tools for getting a result and I don’t name cutlery either, though I might use a shortened version of the name. Brian Schijf said my studio needed a name, but I was even unsure that it was a studio as such.  I just have a pile of wires and some kit opposite my bed. That is where I spend my time. There is nothing glorious about it, but he said a studio is even the most basic facility where you can make and record music. I still don’t have a name for it. It’s my room. 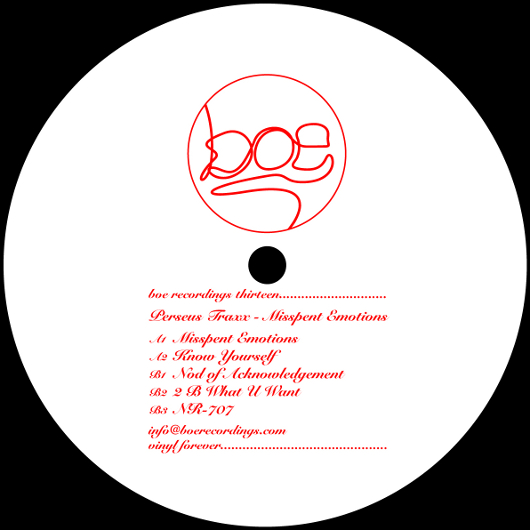 Aside from the aforementioned stuff on Bunker and M>O>S Deep, what you got coming up in the remainder of this year and beyond?

2011 is still looking pretty hot to be honest, we have a double pack of Nite Vision tracks coming out on BOE Recordings, and I have the Sequencias 002 release. There are some good bits in the pipeline, and they hopefully include the first release on Our House Recordings, run by the guys from www.thisisourhouse.org, which will include a remix from Meschi.

I have some hopes for other bits to come out, a good four or five releases on a range of labels, but nothing is ever set in stone and I don’t want to jinx anything at this early stage of the game. You’ll just have to keep your eyes and ears peeled. I’ve also given thought to getting on the case with running Future Flash next year. There’s plenty of material – not just mine either – and I’ll more than likely stick with small runs of 100 or 150, but need to get a few things in place first in terms of shifting them in one go as I’m not keen on messing about, and I think the economic climate means P&D deals are few and far between. More Nite Vision is definitely on the cards, that’s a certainty.

Do you retain any interests outside of music or as we suspect spend most days glued to your 707 and acid box?

Don’t forget the Juno, it’s not all about acid. I do have interests outside music, but where I am with things at the moment, it’s the music that provides the main relief for me and so is the primary focus for now. Oh, I pick mushrooms. I know a number of good places, and I’m not talking about magic mushrooms, though I do know what they look like and a lot of places they grow. This year hasn’t been so good due to the weather, and so everything is a bit late and things are popping out in November that should have popped out six weeks beforehand, and at the moment I really can’t be bothered with going out and wandering round the woods as I’m busy trying to get some things finished.