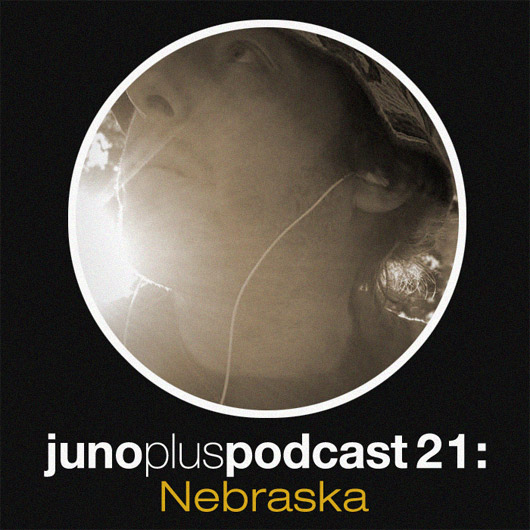 This week’s mix comes from a producer whose recent album really struck a chord at Juno Plus: Nebraska.

Earlier this year the London based producer, real name Ali Gibbs, released the excellent Displacement, a twelve track set that further cemented a long gestating relationship with Rush Hour.  Following a reissue of the Terrestrial Variations EP in 2009 (originally out in 2000 on Russ Gabriel’s Player label), the Dutch label dropped a series of EPs from Nebraska that further displayed his talent for crafty sampling of dusty old records, melding canny disco elements with rough hewn house and techno rhythms. The culmination in the release of Displacement justifies both Rush Hour’s faith in Gibbs’ clear talent as well as the producer’s old school approach to making music. When quizzed on how he makes tracks, Gibbs replies amusingly that he “buys lots of really good old records over a period of 25 years. Listen to them. Think about it. Listen again. Sample something. Fiddle about endlessly until you like it. Play it to some other people. Adjust accordingly. That’s kind of it really!”

There’s a definite lack of information surrounding Nebraska, which seems incongruous in 2011, where every detail of a producer can be found in a particular corner of the internet, and this is certainly how he likes it: “I’m not looking to make a living from music at present, so there’s no great need for me to self-promote or put out tracks every week. That’s allowed the Nebraska thing to grow organically over the past 10 years or so. The reaction (to the album) has been great; same with all of the recent Rush Hour stuff. It’s really nice to get a warm response.”

Given our love for Displacement and the good work Rush Hour do in general, it seemed only right that Nebraska should be the first artist from the label to contribute to our podcast series. The subsequent mix is an hour’s worth of music that references both the past and the present, and includes some nifty edits from Nebraska himself.

Juno Plus Podcast 21 – Nebraska by Juno Plus on Mixcloud