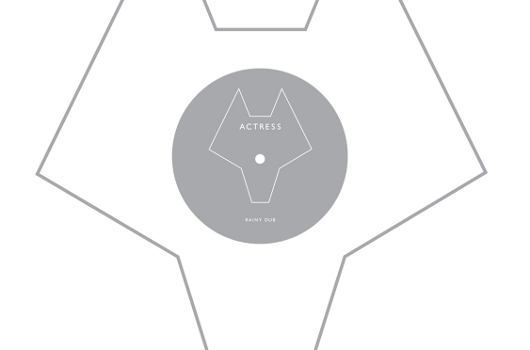 As with most things Honest Jon’s, a new release from Actress has just dropped on the label with little prior fanfare, offering an insight into the elusive producer’s forthcoming album, set for release on the West London label early next year.

Lead track “Rainy Dub” is described quite accurately by Honest Jon’s themselves as the implacable, alien son of the Sleng Teng rhythm; it’s essentially nine minutes of otherworldly, lo-fi digital dub from another century, complemented by the abrasive pressurised strains of “Faceless”.  Both tracks are exclusive to this twelve inch, which comes in a debossed sleeve featuring metallic ink designed by Trilogy Tapes boss Will Bankhead.

Actress’s return to Honest Jon’s for this twelve inch and subsequent unnamed album is just one of several interesting projects the label has bubbling under currently. Alongside the release of the much publicised Pinch and Shackleton album, Honest Jon’s have been busy commissioning a series of illuminating artists to rework tracks from last year’s Shangaan Electro compilation, which so far has seen everyone from Ricky Villalobos to Oni Ayhun and Peverelist contribute. We can look forward to forthcoming remixes from the aforementioned Actress, along with efforts from Rashad & Spinn, Demdike Stare, Hype Williams, MMM and Old Apparatus.