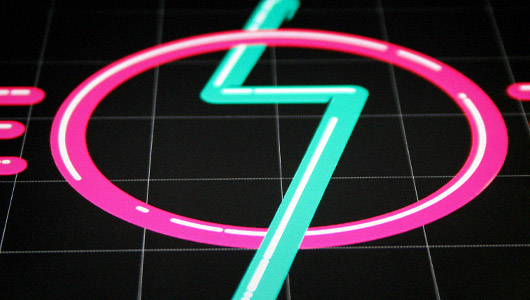 There was a distinct air of synchronicity about this week’s releases, with some of the best releases indelibly marked with the number two.

Take FXHE boss Omar S for example – his High School Graffiti EP (as pictured above) arrived replete with tracks split across two twelves alternately covered in gorgeous green and pink tones. Musically, it’s every bit as impressive as his brashly titled album of a few months ago and even features a collaboration with the man like Theo Parrish (it’s not a Wu Tang cover in case you were wondering).

Another double pack of heat arrived as R&S dropped the rather fine Space Dimension Controller album prequel The Pathway To Tiraquon6. Forever ambitious and eccentric in his output, Belfast’s own Sun Ra delivered a conceptual sci fi epic that veered effortlessly between sprawling soundscapes that twinkle with sumptuous detail and jerking, compressed techno. Furthermore it arrives on that nice clear blue vinyl!

Staying on theme, two of our favourite labels dropped twelves from two more of our favourite producers. Running Back gathered up a double dose of tracks from the soon to be finally released in physical format Boof album by Sir Maurice Fulton, whilst Jason Letkiewicz returned to his Malvoeaux project for the latest 100% Silk release, which also debuts the label’s latest sleeve redesign. Speaking of pairs, Rawax – who haven’t caught their breath in the release stakes since they emerged – dropped two twelves this week, with Appetit’s A5 at the helm for the first – expect everything from downtrodden, glacial techno to vintage hi-tech utopia via bustling beatdown and crystalline subaqueous deviations on the Four Cuts EP. A Rawax offshoot, imaginatively framed as Housewax, also dropped their first release with veteran Owen Jay, Alex Danilov and a Housewax production all featuring.

The latest FunkinEven twelve – and the debut release on his own Apron imprint – might be lacking in the above thematic consistency, but it’s equal in all other respects, serving up a trio of acid tinged analogue freakouts that further document his development into one of our favourite producers. Speaking of our fave producers, Gunnar Wendel aka Mosse The Boss, contributed a track on the first ever vinyl release from cultish imprint Ominira, debuting a new alias in Kareem Moser in the process. His majestic “OS2009” is an an ephemeral delight that explores previously uncharted crevices of sub bass. The accompanying tracks from knackered house specialist Kowton and Juniper make this a twelve inch debut of much promise for the German imprint. New aliases were in vogue this week as Dani Plessow slipped out Love Prescription, perhaps the best Delusions of Grandeur to date under the VFB moniker (Bundesliga fans will clock it’s another ode to his hometown).

At Juno Download, the arrival of Sandwell District’s album Feed-Forward into the digital domain some nine months after it physcial release wasn’t so much fashioably late as rocking up after the party had finished and the lights had gone out. Never mind, because it served as a timely reminder of how the shady UK-US collective totally nailed it on this one; one of the best electronic LPs of recent times, without a doubt. It was a good week for digital techno, with the monstrous Planetary Assault Systems album and swampy Andy Stott EP also getting a release. Perhaps our favourite album, however, came from Mexican maverick Rebolledo. His long awaited debut album for Matias Aguayo’s Comeme imprint expanded on his peculiar but invigorating take on house and techno, offering up a selection of tracks that veered expertly from the raw and brutal to the cute and cuddly.

On the digital singles front, Paul Rose followed up his anthemic Adrenalin EP with another release under the SCB guise; “Mace” and “Overlay” were a bit rougher and tougher than his previous excursion. Elsewhere, John Talabot, Das Glow and Soul Clap remixed Tigersushi don Joakim, while DBridge got lonely on Exit and Maya Jane Coles tried to get away on 1trax.

CD-wise, we couldn’t help but be impressed by Modeselektor’s relentless assault on the electronic music world. No sooner had the dust settled from their own album, they released a blistering LP from Anstam: Dispel Dances explored bass music’s past and present, sneaking in Detroitian tech-jazz (“To All The Voices”, “Handsome Talks The Talk”) and hectic, next-level dubstep-jazz (“In The Bell Run”) amidst the dubwise rhythms, basement atmospheres and smoky Berlin textures.