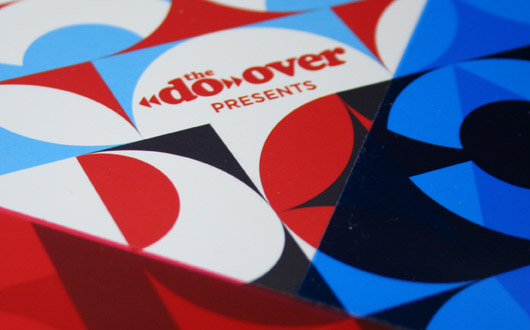 Things got a bit cheeky at Juno Plus HQ this week as we slipped out two rather fine mixes in a week when there wasn’t even a podcast due for broadcast. You can forgive us the indulgence when it’s a Halloween selection from JD Twitch and a 30 minute mix from the legendary DJ Stingray.

The latter formed part of a truly illuminating interview the producer undertook with Richard Brophy, and we really implore you to read it if the chance hasn’t arisen yet. Moving away from the slapping of our own backs and towards the giving of props to others, it’s been another killer week for releases across the board, with the fictional award for best cover art going to the 3rd Volume of the Do Over’s ten inch series. As pictured above, the 3D packaging that includes red and blue acetate inserts, as well as purple marbled wax and a custom printed inner sleeve, made it quite the attractive record and the music was just as good – especially Noelle Scaggs’ impression of a sex starved Grace Jones covering “Tainted Love”.

Clone won the imaginary label of the week award with two devilishly good EPs from Untold and Erik Travis. The arrival of the Hemlock boss on the Dutch label makes for exciting times, and Mr Dunning delivered two ripe explorations of techno befitting of the Basement Series, whilst Detroit’s electro funkateer Travis returned with Big Spender, a second Crown Ltd release with further examples of his unique lo-fi but heavily funking craft.

It was a plump week for all strands of techno to be honest, with the sludgy end being well represented. Modern Love naturally led the way with more paranoia inducing stereo crawls – this time from Pendle Coven’s G H whose debut solo release continues the label’s recent lineage in fine style. The second release on Avian from label co owner Ventress bridged the gap between the Modern Love abstraction and more finely sculpted techno, whilst Avian’s other overseer Shifted also turned up with a remix on the debut EP from fledgling London label Ear To Ground. Another impressive debut in the techno arena came from another London label Diagonal, with boss Powell at the helm for The Ongoing Significance Of Steel & Flesh which sounds like a lost Mute demo recorded in a garage in the outskirts of Macclesfield and also features an edit from Regis. Big look!

Imagine being Levon Vincent and having to follow up the masterful Man Or Mistress! Well Mr Vincent is clearly up to the task, as his Impressions Of A Rainstorm EP wisely chose to eschew topping his former glory’s explosiveness in favour of further revealing his innate talent for razor sharp sonic detail. Another producer showcasing his talents this week was Hessle Audio’s David Kennedy, returning to his lesser used house ledge moniker Maurice Donovan for the quite excellent “Call My Name”, which is basically him showing off how much fun he can have with a vocal hook over a raw house bump.

A lean week at the bassier end of the spectrum it might have been, but there was quality despite the lack of quantity as Mala dropped a double dose of finely judged remixes of the original Upsetter Lee Perry, whilst Mosca Mosca Mosca added Martyn’s 3024 to his blossoming discography with The Wavey EP, worth investigating for the unhinged “Jager” alone. Hotflush returned with what seems like their 43rd twelve of the year, offering a sneak peak into the forthcoming Sepalcure album via “Pencil Pimp”, one of the aforementioned long player’s many highlights.

Over at Juno Download, Sound Pellegrino introduced our ears to the Crossover Series, which offers the chance for like-minded producers from different paths to collaborate together with the aim of “crossing the invisible bridges of the great house music archipelago”. The standard for the series was set truly high on the inaugural release that saw Alex Bok Bok Sushon team up with Tom Trago for the Night Voyage Tool Kit EP. Elsewhere, for the latest chapter in Maurice Fulton’s BubbleTease Communications Classics series, the Sheffield-based maverick unfurled a pair of previously unheard remixes of soul chanteuse Nicole Willis. Unlike his shamelessly celebratory remixes of Willis’ previous single, “Holding On”, these “Feeling Free” versions offer deeper, more dubbed-out thrills – highly recommended from one of the most overlooked digital-only labels out there.

Now it may be early days for Gerry Read, but already his unique tendencies are standing him aside from the rest of the sizable pack. On “We Are” he dropped a brace of sludgy, unconventional house/techno jams; with the right room of freaks on the floor there’s no reason why these tracks can’t be party rockers. Dan Snaith’s latest Daphni EP hit the digital shelves courtesy of Allez Allez’s Amazing Sounds imprint, as did Gold Panda’s newbie from his ace DJ-Kicks mix, replete with two remixes from Peaking Lights. It was a sterling week in the office marked Techno Dept too, with new releases from Mike Huckaby and Inigo Kennedy supplemented by killer remix packages from Xhin and Deadbeat.

CD-wise, the new Oneohtrix Point Never album arrived, with Brooklyn-based experimentalist Daniel Lopatin indulging his love for textures and synthesized drones on Replica, utilizing vintage synthesizers and oddball effects to create the sort of occasionally nightmarish productions that veer from frighteningly intense to hypnotically blissful. Capping off a fine week was a wonderful collection from L.A. duo Tropic Of Cancer, who signed off from legendary UK imprint in style, with a collection of old singles and unreleased demos. The End Of All Things is dark, evocative and gothic, all moody soundscapes, Athena-ish pulses and occasional forays into the bleaker end of classic EBM, and we can’t recommend it highly enough.