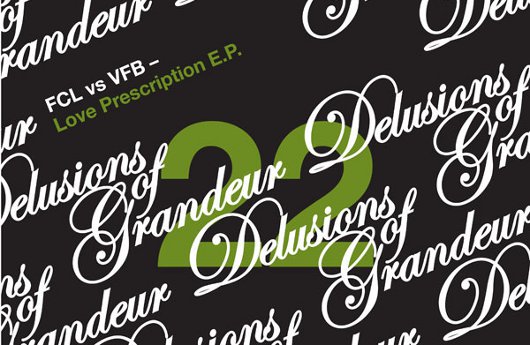 The next release on reliable deep house label Delusions Of Grandeur will be a collaborative EP from Belgian duo FCL and Danilo Plessow, working under his new VFB alias.

The prospect of Plessow – best known as the man behind the Motor City Drum Ensemble moniker – and FCL teaming up in the studio is an exciting one: both have been responsible for some of the best backwards facing house music to emerge in the past 18 months.

FCL – aka San Soda and Red D – produced one of the best house 12″s of 2010 in the shape of Vocals For Everyone!,  released on the latter’s We Play House imprint. Plessow, meanwhile, this year released his own DJ-Kicks mix via !K7 Records – capping an impressive rise through the artistic ranks for a man who shot to prominence off the back of the hugely successful Raw Cut edits series.

The centrepiece of the 12″ will be “Love Prescription” (featuring the vocals of Stef Gustaph) which will be presented in original, dub and acapella forms. Also appearing on the flip will be a second original track, “Matrix Plus”.

You can listen to short sound clips of each track via the Juno player below. Delusions Of Grandeur will release FCL vs VFB’s Love Prescription on November 10 on 12″ and digital formats.