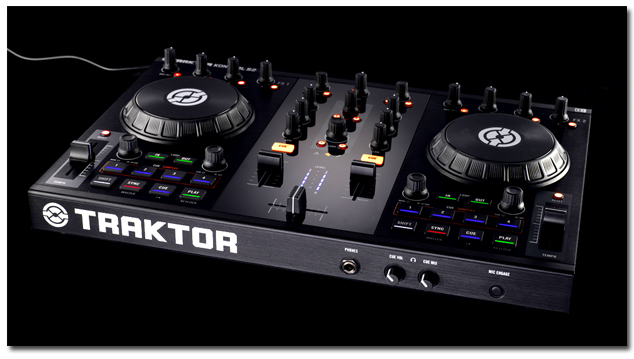 Late last year we took a look at Native Instruments’ S4 controller, the one-stop solution for Traktor Pro users. Now our friends in Berlin follow up with a unit that looks to address the needs of the DJ who needs to travel light.

The Traktor Kontrol S2 is essentially the more stripped-down sibling of the S4, offering two channel mixing with one dedicated sample deck channel. It boasts a 24bit 96kHz soundcard, which like all NI hardware doesn’t disappoint in output level. Size-wise we’re talking 43.8 x 29.2 x 4.4cm, which is slightly smaller than the S4 (a meaty 50 x 32.2 x 5.2 cm) and they’ve shaved nearly a kilo off the weight, so there are steps in the right direction regarding portability, however we’re still a little way off conventional DJ luggage dimensions.

The layout is nice and simple, once again featuring those fabulous 12cm touch sensitive jog wheels for nudging, scratching and pitch bending. It’s a well manufactured piece of kit and the back panel sports twin outputs consisting of 2 x stereo ¼” TRS and RCA for main and booth output, with dual purpose level knob plus TRS for the microphone input. There’s USB for power/MIDI with DC 9V input and on/off switch. On the front there’s a reinforced ¼” TRS for headphones with push to expose knobs for level and cue with a nifty microphone engage button (see below).

The main user interface is essentially the same as the S4, housing a total of 27 non-slip rubberized knobs and 40 keys including eight transport buttons per deck, which consist of regular Shift, Sync, Cue and Play, with space having been saved by doubling up the cue point buttons with the sample deck (this works very well). Other omissions include the filter knob and loop recorder sections, although the latter can still be accessed by a good old fashioned stroke of the mouse (remember that maneuver?). Master output VU’s and the illuminated status display below the jog have also been omitted with no great frowns. The brace of 5mm faders feel solid, the cross-fader will almost certainly survive the punishment it will receive; likewise the pitch control sliders (you can recalibrate most of the moving parts except the pitch sliders and jog wheels in the software preferences). Everything else is laid out as you’d expect for a two player console, with the effects control along the top axis of the unit and browse and select features sandwiched between the EQ module.

Software-wise there’s no special edition for the S2 – it ships with Traktor 2, which you can customize to a certain extent in the preferences. Getting stuck into a mix session is effortless even if you have no prior experience with sample decks or digital DJing. The workflow is simplified due the limited controls, thus making its operation a great deal more hands-on than the four deck version. It rocks in at a more than acceptable price at £499 (compared with the £769 of the S4), which will make it an attractive investment to some in these trying economic climes. [Find out more at Juno]