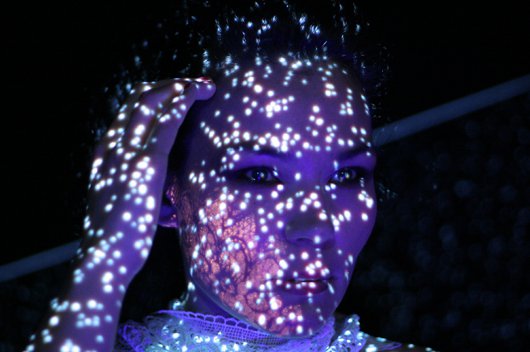 Having a long musical career behind her, releasing on Switzerland’s Mental Groove, and the sadly defunct Output, Wax signed with British electronic royalty Border Community, who will be issuing her new long player . Taking its name from the scientific experiments currently taking place at the Large Hadron Collider in Switzerland, where her grandfather purportedly once worked, Dust Collision is apparently a journey through her “own magically realistic cosmology of witches, demons, dreams and ghosts”, guiding us “like a disco Sherpa through the peaks and valleys of human experience”.

On first listen the album has much in common with the ethereal electronics and emotive vocal work of Fever Ray and Björk, particularly on the brittle and ethereal “Human Twin”  and expansive “Maze Rider”, whilst tracks like “Dust Collision” and “Echoes And The Light”, complete with its strobing EBM bass pulse provide a nice fit with Border Community’s more dancefloor-friendly releases.

A further reason to get excited is the news that Border Community head James Holden has taken mixing duties on the album, undertaken with Wax at his London studio. His influence on the sound is clear, with each element sounding as crisp as you would expect from a man with as esteemed a reputation as Holden. The album’s release will be preceded by a limited 12″ entitled The Holden Edits, containing, surprisingly enough, two James Holden edits of album tracks “Echoes And The Light” and “Holy Beast”, the first of which is available to stream below. Given the relative scarcity of Holden’s productions these days, this is likely to sell out fast, so keep an eye on Juno for its release.

Dust Collision will be released on 14 November, while The Holden Edits should be available some time around October 5.