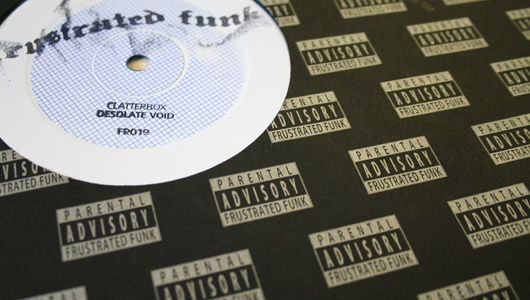 It’s T-Minus seven days until we celebrate two years of bad puns and good music in a Dalston basement, the line-up has fully been announced, we’ve got some shiny posters that will soon be adorning the walls of London and the intern is on balloon blowing duties.

The perfect taste of what to expect from guest DJ Mr Talabot arrived in the shape of that excellent Hiverned 10 inch, with our glowing praise on the release matched by the record buying public’s eagerness to own it. Along with the new Four Tet twelve it was one of those records that spent very little time getting used to the shelving in the Juno warehouse.

Looking back, this was a week that truly signalled the end of the annual autumnal slump for releases, with some prime numbers arriving across the board. The ever excellent Vakula returned with a second Shevchenko release on dashing clear vinyl that sported two more examples of the Ukrainian’s talent for making house music sound beautiful. Another prolific hero of ours, Mr Legowelt, turned out for the increasingly impressive Greek label Echovolt with four Utopian jackers on the Poverties Paradise EP.

Further deviations in house sounds from Runaway on the newly minted Let’s Play House imprint (check that Beautiful Swimmers remix), Trickski getting the Trago and Boman makeover on Suol, a highly rated drop on Wolf + Lamb from Aquarius Heaven, Dinky surfacing on Visionquest and another chapter in the Hot Creations juggernaut meant all aspects of house were covered.

The chance to yelp “SKUDGE!” gleefully was afforded as the Swedish duo dropped the fifth EP on their self titled imprint as well as rubbing Ripperton up the right way on a Tamed Musiq release. Whilst not throwing any curveballs, the former does demonstrate a somewhat lighter side to the trademark weighty Skudge sound, but their inhernent sense of rhythm remains as strong as ever. The clutch of Dutch labels doing excellent work was nicely represented this week, with a Clatterbox release from Frustrated Funk filled with rippling dark electro and eerie drone – it also came in the fetching hand printed sleeve seen above – whilst Delsin gave us an insight into what the forthcoming album from Boris Conforce will sound like on the illuminating Dystopian Elements EP.

Carl Craig lent his remix talents to Rekids for a take on Ronny & Renzo’s “Heartbreak Theme” whilst his Planet E buddy Monty Luke opened proceedings on his new Black Catalogue label in fine style with the Tommorow EP. Shout outs to Stingray too for the Misinformation Campaign EP – lead track “Herd Instinct” is on some Model 500 meets  Oni Ayhun tip.

A fine week it was in the realm of bass centric call it what you want music too! Lazer Sword’s Lando Kal added to his growing repute with a cheeky slice of 90s classic sampling crunk that creaked with swelling rave pressure on the newly established Stillcold White Label. The B Side from the unknown to the unknown Stillcold Mysteres is equally good if not better. Peveralist’s Punch Drunk was the latest conduit for the intriguing sounds of Ekoplekz, with a sumptuously presented collection of claustrophobic terrors on Intrusive Incidentalz Vol 1, whilst Brackles further cemented his Rinse FM relationship with a cannily titled debut twelve inch on the station’s label that was a deft showcase for his ear for brittle yet driving rhythmic shapes.

Over at Juno Download, we were awestruck by the arrival of the Tony Allen Chop Up compilation. First released on vinyl and CD back in 2008 under the worldly gaze Honest Jon’s, its arrival in the digital domain was immensely pleasing. The perception may still linger that Tony Allen’s influence on modern electronic music is limited to Afrobeat or broken beat, but as this remix compilation attests, his influence looms large in other, unexpected places.

Another highlight could be found in the arrival of Distal’s debut drop for Sinden’s Grizzly imprint. Following releases for Tectonic and Fortified Audio, the Atlanta-based beat scientist added to his growing rep with an EP dripping with fidgety tropical beats, electro pulses and nagging hooks. Elsewhere Amanda Brown’s 100% Silk maintained its crazy new-record-every-week release schedule with an EP from Brooklyn based producer Octo Octa, who worked through a number of house centric styles to fantastic effect.

Move D’s latest missive for Workshop Records arrived, the vinyl run having long since sold out, while Pangaea debuted on Untold’s Hemlock with two jerking darkside manoeuvres and Braille (aka Praveen Sharma, one half of Sepalcure) landed on Hotflush with four tracks simultaneously streaked with vintage soulful elements and a the kind of frosted futurist slant that makes the Braille sound so appealing.

Of course the most-talked about release of the week was a CD: Theo Parrish’s Ugly Edits, to be precise. For those who missed out first time around – or balked at the Discogs prices demanded for second-hand copies – it’s something of a must-have, even at a steep £27.99.