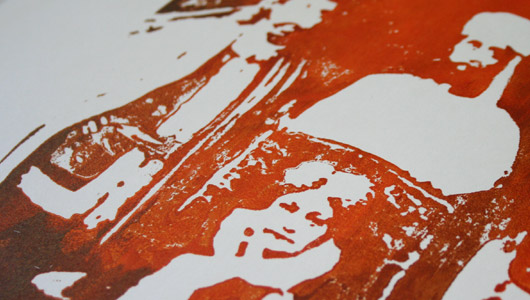 Excitement levels for tonight’s second birthday celebrations in the company of Saul, Talabot and Ossie are pretty high right now (not even this raging hangover is impinging) and we should say early entrance will guarantee you the chance to hear some of this week’s finest picks.

The most impressive release by far this week was the Pacific Horizons twelve on the suitably cosmic sounding Pacific Wizards Foundation label. The music matches expansive Quiet Village remixing The xx delight with sprawling dubby industrial mid tempo house, whilst the presentation is something else. No single twelve inch is alike thanks to the multi-coloured screen printed cover art and somewhat erratic logo printing.

Aligning the many strands of house music represented this week, the good ship Clone shot out some more archived Gerd material boosted by the glorious tones of Oliver Day Soul and Clone royalty remix from Serge & Tyrell. That Mark E getting the 2-step Tensnake treatment finally surfaced as did the totally brilliant Night Plane remix of Warpaint’s louche jam “Undertow”. The boss like Kassem Mosse teamed up with Nonplus again with four tracks that traversed paranoid machine funk, jacking electro and reverb laden house.  Two of the best tracks from UQ poppa bear Jus Ed’s album on Mule got culled for a twelve inch and Rush Hour launched ANOTHER sub label in fine style with archived material from Aardvarck and the excellently named Duster Valentine.

There was a veritable feast of techno this week too, with Skudge getting remoulded by in a Berlin and Bristol fashion by Substance and Appleblim respectively and Bob Hood digging up his Sister Sledge sampling thumper for the latest in the M Plant Perpetual Masters series. Blawan put off audition practicing for the Life Aquatic sequel to indulge in some Oliver $ baiting on the incendiary What You Do With What You Have, and Fachwerk boss Mike Dehnert continued his streak of brilliance with the latest Echocord Colour release. Shout outs to the new Answer Code Request label whose first release captured the jagged end of UKG crossed with elements of dystopian Detroit techno drama across fizzing IDM soundscapes.

Over at Juno Download, Jamie Russell’s new label Sneaker Social Club launched with two tracks of downtempo funk and Detroit techno wistfulness from Throwing Snow, while those of you who missed out on the blink-and-you’ll-miss-it vinyl release of the Head High remix of 2562 can breathe a sigh of relief – it is now in the digital domain.

Elsewhere, Marcel Dettmann’s latest EP may refer to linguistics in its title, but there is no danger that what the Berghain resident wants to achieve will get lost in translation. With the exception of the spacey soundtrack and “Apollo” samples on “Barrier”, this release is all about dancefloor functionality and is as stark as the imposing architecture in the club he built his reputation on. Other highlights included the Juno Download chart-topping Mosca two tracker for Numbers (check out our full review here) and Kevin McPhee’s exercise in subtlety for the increasingly impressive Bristol imprint Idle Hands.

Some nice CD action this week too – we recommend checking out the Joakim (via Tigersushi) and Apparat (on Mute) albums in particular. However the Juno Plus gold star definitely goes to Four Tet and his eagerly awaited Fabriclive mix, which is not so much a DJ set as an impressionistic rendition of Mr Hebden’s own memories of clubbing with Farringdon’s finest. Considering the fact that Four Tet’s own productions are usually saturated in melody, it’s a relatively dark mix, dominated by murky bass tones and sharp, brittle beats, with a constantly shifting sense of urgency that encourages rapt attention throughout.