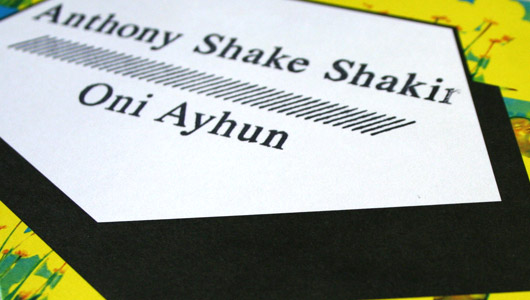 Confusion and much rumbling of stomachs reigned at Juno Plus Headquarters earlier this week when what looked like a mass delivery of pizzas turned out to be the hefty 6 x LP edition of the Plastikman Arkives release.

Thoughts of pepperoni binges were cast aside to concentrate on a strong week of music led by the Honest Jon’s commissioned remixes of Shangaan Electro. Project overseer and Basic Channel icon Max Ernestus had a gloriously lurid 12″ all to himself, though the other release that featured remixes from Scandinavian oddbal genius Oni Ayhun and the masterful Anthony Shake Shakir really hit the spot here. It was a big week for thumping techno overall, as a new Clone Basement 12″ from Dexter provided the perfect balance between the kind of vintage electro he is known for and the more Bristol-centic house sounds of Bashmore et al (as well as slipping in a nice dusty revision of that Amerie track).

Darker sounds permeated the debut release from Japanese imprint 10, which you’d expect when there’s a track from foundation worrying act Ancient Methods and cover art featuring perhaps the most vexed looking seagull we’ve seen in some time. A similar tone permeated the Moustache Techno release from label regular Mark Du Mosch, most notably the vicious opener “Captain Blighy”, whilst International Feel also dipped their espadrillos into the waters of techno with a release from Japanese producer Gonno replete with excellent remixes from Skudge and Gatto Fritto.

Further reason to heap praise on the shoulders of New York label Long Island Electrical Systems arrived with two releases, the first being four tracks from Steve Summers aka Malvoeaux that only strengthen our opinion that the label is becoming the transatlantic cohort to the Lowland endeavours of Creme and Clone. The second twelve from Marcus Cabral was in stock for like twenty minutes…

The newly minted Rawax label swiftly returned with their second release that saw Siberian producer Unbroken Dubs at the helm again with some material that present the shadowy figure in a more dancefloor friendly light, akin to something you might find on a latterday Mathematics release. Just as thrilling was Praveen Sharma’s solo debut on Hyperdub as Braille, with four tracks every bit as raw and exciting as his contribution to the Direct Current series.

The latest – and perhaps best to date – Radiohead Remix EP arrived with contributions from the old and bold in Modeselektor and the new in Objekt, making for just one of many key twelves in the realm of heavy bass. For example, young Mancunian Walton made his debut on Hyperdub in fine style with four tracks that demonstrated a true understanding of new and old styles of electronic music beyond his youth. Hessle Audio’s least celebrated son Pangaea slipped out a double dose of darkside rave tackle for Untold’s Hemlock which perfectly fit the description of “the spirit of 92 via Plastic People”. Finally R & S unveiled their latest addition in Cloud Boat, on a 10″ that demonstrated the full range of the producer’s talents, with the clacking 2-step undulations of the title track complemented by the more wistful song based cavernous sludge of “Bastion”.

Over at Juno Download, all eyes were on the emergence into the digital realm of Roland’s Jam, the latest unhinged future jack missive from FunkinEven for Eglo Records. The title track took no time at all in declaring its intentions in decimating the dance: a stomping beat and nasty acid line were scuppered by edits that displayed a desire to screw people’s heads up just when they were getting into the groove. And if you like your music unhinged, we strongly suggest checking out the latest Monad release on Stroboscopic Artefacts, with label boss Lucy at the controls. Our favourite track (“Pentad”) can only be described as a veritable assault on the senses that feels like Lucy has taken an excavator to the listener’s cranium.

Elsewhere, the fresh sounds of Dutch newcomer Presk debuted on Ten Thousand Yen, while that killer Joe remix of Untold arrived into the world of wav. a week after its vinyl release and 2-step masters Horsepower Productions dusted off some unreleased jams for Tempa. Over at Ninja Tune, Emika indulged in some appetite whetting ahead of the release of her debut album, with a single featuring remixes from Brandt Brauer Frick, Kyle Hall and DJ Rashad and DJ BMT. Her seductive take on pop music deserves a huge audience, but the masses would probably just be scared off. Sad, eh? Finally, George FitzGerald maintained his fine year by providing the debut drop on the Man Make Music imprint he co-runs, with two slices of his effortlessly emotive brand of 2-step.

Our pick of the CDs meanwhile was undoubtedly from synthesizer fetishist Antoni Maiovvi, who effectively created soundtracks to two imaginary films (the press release for these was superb, by the way). There’s certainly a grandiose feel to Battlestar Transreplica’s two standout tracks, the coolly creepy 16-minute opener “Martian Time Slip” and unfeasibly beautiful closer “I Offer Unto Thee Something Beautiful, Something Burnt”. While Trial By Bullet’s Italo-centric tracks are decidedly cleaner, crisper and, ultimately, deliciously joyous, they still retain a cinematic feel.