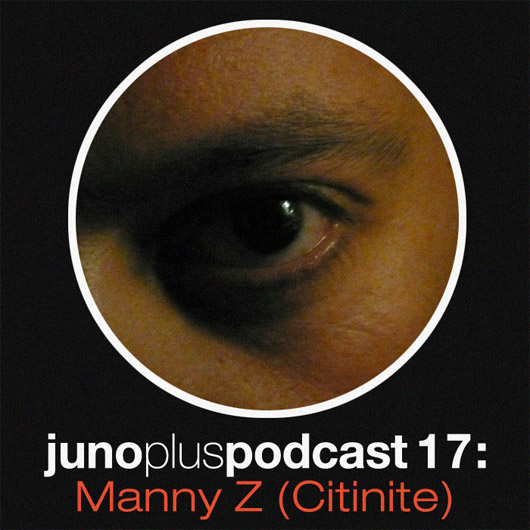 This one is a bit special. We’ve always been impressed by the neon tinged output from London imprint Citinite, so a request for label boss Manny Z to contribute a mix to our fledgling series seemed natural.

That Manny should return with perhaps our favourite mix so far, adroitly plotting the lineage between vintage Detroit and UK bleep and more latterday sounds, meant that we couldn’t wait to unleash this one.

For the uninitiated, Citinite is a label whose overall focus betrays a certain nod to the 80s era. From the name to the artistic direction to the multi-faceted output which covers electro, Chicago house, Detroit techno and Prince influenced funk, with releases to date from Jimmy Edgar under his alias Her Bad Habit, US producers Gosub and Robert O’ Dell and Ad Bourke. Further intriguing projects from the label have included remix EPs of cult 80s acts like Sexual Harassment and Dez Dickerson.

Whilst freely admitting his love for the 80’s, Manny makes a salient point regarding how people should remember the music that surface during this period, stating “it’s important not to be retro for the sake of it; the thing to remember about those genres (electro and Detroit in particular) is that they looked to the future, so you need to continue in that spirit.”

The label recently celebrated five years of business (and put out a free digital retrospective via their website which we urge you check out) and Manny explains that despite its growth in troubled times, there is inspiration out there: “In the past couple of years there seems to have been a creative renaissance in the UK, with labels like Hyperdub and Planet Mu doing particularly well, and other labels abroad like Rush Hour which have refreshed classic dance music. So even though things are still hard, I feel there’s a lot of positivity at the moment.”

Speaking on the future it’s apparent that there is plenty to get excited about from Citinite, with the imminent release of an EP from Drive Me Home featuring vocals from Olivier Daysoul, Spoek Mathambo and Riky Rick as well as Machinedrum and Computer Jay remixes. Following that, the release schedule is described as being in flux, though two things were mentioned in particular by Manny, namely “Dâm-Funk’s new project, Mynk Rychardz, which contains a colder style of machine funk than people are used to hearing from him; and an EP by Death Comet Crew which includes remixes by LV and Gifted & Blessed.”

Before all that however, Manny will be partaking in the London leg of the Martyn’s cross continent series of Ghost People album launch parties at the now standard secret East London location this Thursday alongside Kode 9 and D Bridge, with the sounds that permeate this mix the kind of sonic assault you can expect from Manny on the night.

The tracklist for this mix has not been published at the request of the artist, who enjoys the sensation of listening to mixes without the knowledge of which track arrives when. The more technically savvy amongst you will however uncover the full tracklist in the download file.