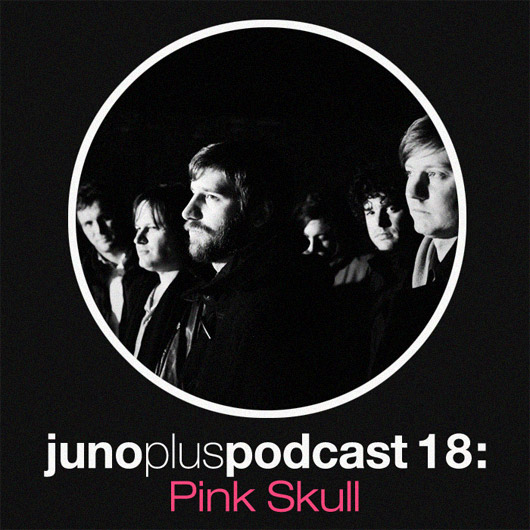 Philly based psychedelic doods Pink Skull man the decks for the 18th mix in our podcast series with a near hour long all-vinyl excursion through recent disco and house burners.

The band have just unleashed Psychic Welfare, their third studio album, via the ever esteemed RVNG Intl imprint. Equally ambitious in its presentation to 2009’s Endless Bummer, the third album sees them expand operations to include the likes of Adam Sparkles and Robin van der Kaa, formerly of Relish types David Gilmour Girls.

Presenting the band as a more song based entity, Psychic Welfare still retains the trademark Pink Skull sense of humour – see track titles such as “Either The Luminescent Wallpaper Goes, Or I Do” and “Human Hair Disco”  – whilst they also make space to veer into the kind of heavily psychedelic freakouts in places that made us love them in the first place.

The band’s core members Justin Geller and Julien Grefe also know their way around how to make people dance, being long term residents at RVNG’s Philly based party Making Time. And that’s something that is clearly evident on the duo’s mix  for our series, which comes without tracklist but the more attuned amongst you will recognise some heady selections from the likes of Cottam, Ike and Discreet Unit as well as a Sister Sledge classic.

Juno Plus Podcast 18 – Pink Skull by Juno Plus on Mixcloud

(The download link for this mix has now been archived. You can still stream it via the Mixcloud player above)