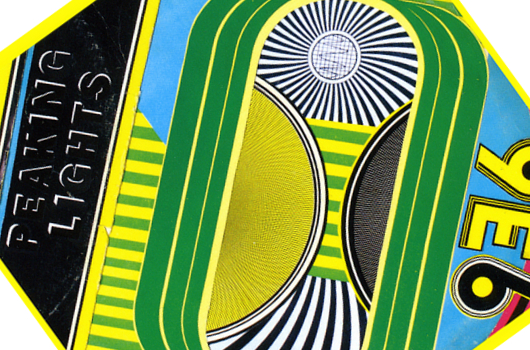 Domino Records have announced the signature of Peaking Lights to their fledgling Weird World sub label, and will give their rather fine second album the proper UK release it fully deserves, as well as putting out a third LP from the West Coast duo.

936, the album in question, was released earlier this year and available on import via the perennially on point LA based DIY imprint Not Not Fun. Its bewitchingly beautiful and hazy concoction of dub, psychedelia, cosmiche and disco saw it gather across the board praise and is likely to feature in many an end-of-year list.

The husband and wife duo’s arrival on Weird World will see the album get a full UK and European release in November, whilst it will also be preceded by a remix 12″ – with the full details of that to follow, though a recent Ital interview with with LWE excitingly reveals he may have contributed. To coincide with the Europe-wide release of 936, Peaking Lights will be undertaking a short UK and European tour which includes a date at London’s best venue, Plastic People, as well as gigs in Amsterdam and Manchester.

More excitingly, the band will commence work on their next album in cahoots with studio engineer Al Carrson, who has previously worked on albums for Ford & Lopatin, Yeasayer and Oneohtrix Point Never. The resultant third album will be released either side of the Atlantic by Mexican Summer and Weird World.

Band member Aaron Coys had the following amusing insights to reveal regarding the direction of their new material: “The songs that we’ve been working on have been very groovy and psyched out, foraging deeper into new rhythm techniques and territories, smoother basslines w/a heavy dub influence looking outward to private press boogie records, African & Latin rhythms, and tranced vibrations of the most killer all nite party you’ve never been to: less cocaine, more weed, a sustained orgasm, maintaining 100% creative control, late hot summer nights, come down chill room and low lit zone, lazer light show, smoke machines, being naked and watching the sun rise. This has been inspired by a long wild ride of a year with the birth of our son Mikko Lorenzo Dunis Coyes being at the helm of inspiration. We’re working on moving in new directions, there’s a lot of things we’ll never give up in our passion for making killer chunes but the birth of our son has been an eye opening event to infinite possibilities…”

Weird World will release 936 by Peaking Lights across CD, LP and digital formats on November 11, whilst the band will also play the following dates: